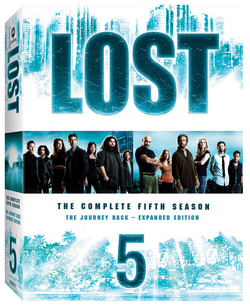 The fifth season is also available in a special Dharma Initiation Kit format, with a DVD list price of $119.99 and Blu-ray Disc version price of $134.00.

The epic story of Lost twists, turns and time shifts in its brilliant fifth season. Packed with bonus material, including a revealing interview with the cast and an exclusive behind the scenes feature with Josh, Lost is better than ever!

When destiny calls, the Oceanic 6 frantically race back to the island. Discover what forced them to return and find out the fate of all those who were left behind. The answers to some of Lost's most pressing questions are revealed in this spectacular 5-disc collection, complete with deleted scenes, a behind the scenes celebration of the 100th episode and an incredible vault of exclusive bonus features.

The show that revolutionized primetime proves once again why it is television's most addictive and creative series!!

This series of hieroglyphs translates as "The summoned one ordains it." Template:Crossref

This is the first Lost box set to have a special edition version. It is called the Dharma Initiative Orientation Kit. It comes in a unique package and contains five discs, one VHS tape, maps, patches, pamphlets, and other paperwork. [4][5] The set contains the following:

This special edition box set was only released in the US and Spain.