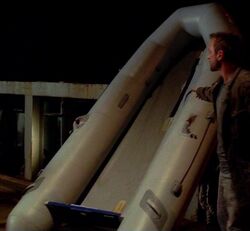 The Zodiac raft was a small inflatable raft used to ferry people and supplies between the Kahana and the shore.

After Michael disabled the Kahana's engines, Minkowski and Brandon took the Zodiac raft in an abortive trip to the Island. Two other crew members later tried to steal the raft to escape the freighter, but the attempted desertion was thwarted by Captain Gault. ("Meet Kevin Johnson")

Gault later told Desmond and Sayid to leave the freighter, but Desmond insisted on staying on the freighter. Sayid then was given the Zodiac raft by Gault so he could travel back to the island to start ferrying survivors back to the Kahana. Gault told Sayid to make sure he navigated the raft on a bearing of 305. ("Cabin Fever") When Sayid arrived on the Island Faraday took over and took six survivors, including Aaron, Sun, and Jin to the Kahana. ("There's No Place Like Home, Part 1") After successfully finishing the first trip Daniel, knowing about secondary protocol, asked both Charlotte and Miles to be with him on the second trip, which he may have known would be the last one. Both of them refused though, choosing to stay on the Island, so Daniel took another five survivors of Flight 815. The raft was in the ocean when the sky lit up, followed by the disappearance of the Island. The Zodiac raft with everyone on it was in the Island's radius, and was moved with the Island. Daniel returned the Zodiac to the beach. ("The Lie") Several flashes later, Sawyer and his group found the Zodiac raft missing. ("The Little Prince")

These survivors were on the first trip to the Kahana.

Retrieved from "https://lostpedia.fandom.com/wiki/Zodiac_raft?oldid=1113851"
Community content is available under CC BY-NC-ND unless otherwise noted.