For other uses of "Zack" or "Zach", see Zack (disambiguation). 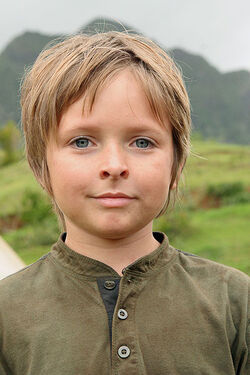 Zack was a tail section survivor of Oceanic Flight 815. He was a young boy, traveling with his sister Emma to meet their mother in Los Angeles. Zack was one of only three children to have survived the crash of Oceanic Flight 815. Zack and his sister were kidnapped by the Others on their twelfth night on the Island. During their time with the Others, Cindy acted as their primary caretaker.

Seconds after the tail crashed into the ocean, Mr. Eko carried Zack to shore. Zack called out for his sister and pointed to her body floating in the water. Eko pulled her to safety and Zack rushed over to her. He dropped her teddy bear next to her before Eko led him away. Ana Lucia began performing CPR and soon revived her. Soon after the crash, Eko asked Cindy if she could look after Zack and Emma while he dragged the dead bodies out of the ocean.

That night the Others invaded the camp and kidnapped three of the survivors. In the morning, the group discussed whether or not they should stay on the beach. Libby held Zack and Emma during the discussion. Nathan tried to get the group to stay on the beach to continue feeding the signal fire, noting the fact that there were kids and injured people who would be difficult to move, and questioning how they would be rescued if they did not keep the signal fire going. Cindy backed up Nathan, informing the tail section survivors that they were a thousand miles off course when the plane crashed.

Ana Lucia and Libby became maternal figures to both Zack and Emma. The children were at Donald's funeral, both hugging Ana Lucia and looking sad. On Day 11, Ana Lucia looked on as Zack and Emma had a small disagreement while playing. However, the next day he and his sister were among the nine tail section survivors kidnapped by a mission of the Others. ("The Other 48 Days")

Juliet assisted in caring for Zack and Emma, who continued to ask about their mother in Los Angeles weeks after the crash. Ben assured Juliet that they would stop asking in time. Juliet reminded Ben that Zack and Emma were children, to which Ben retorted that the two were on the list. ("The Other Woman")

While Jack was imprisoned in the cages at the Hydra station, Zack, holding the teddy bear, approached him, along with his sister Emma and fellow crash survivor Cindy. After Jack yelled at Cindy, they turned to leave and Zack handed his sister the teddy bear. He remained behind for a moment and gave Jack a confused look. ("Stranger in a Strange Land") When Kate found Jack at the Barracks, Jack confirmed to Kate that they were safe. ("The Man from Tallahassee")

Zack was briefly glimpsed at the ruins along with Cindy and his sister after Ben shamed Locke due to his failure to kill his father. ("The Brig")

Zack and Emma lived with the Others at the Temple in 2007. Cindy asked them to give food to the survivors shortly after Sayid's apparent death. ("LA X, Part 2") Later that same day, Zack, Emma and Cindy listened to Sayid's speech and grew concerned when they heard what he had to say. They decided to leave the Temple along with fifteen or so fellow Others. Zack was seen holding his teddy bear during the exodus. ("Sundown")

A few days later, Zack left the clearing along with the rest of the Man in Black's recruits, heading towards the beach to make a rendezvous with Sawyer. Later, the Others were heavily bombed by Charles Widmore's team, killing many of them. ("The Last Recruit") Sayid later mentioned to Jack that some members of the Others survived, scattering into the jungle. ("The Candidate")

Zack (along with Emma and Cindy) survived the mortar attack launched by Widmore's team and continued living on the Island under Hurley's reign. (Lost Encyclopedia)

Retrieved from "https://lostpedia.fandom.com/wiki/Zack?oldid=1107770"
Community content is available under CC BY-NC-ND unless otherwise noted.