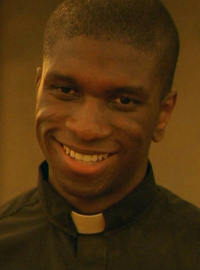 Yemi was Eko's younger brother. He was a priest who died in a plane crash on the Island. Some sources speculate that his full name was Yemi Tunde, though this has not yet been officially confirmed.

When they were young, Eko was protective of Yemi, even stealing food because Yemi was hungry. One day, militant thugs came to Eko's childhood village home to kidnap children to join their ranks. An unidentified Nigerian guerrilla member tried to force Yemi to shoot an unarmed man. When Yemi refused to fire, Eko grabbed the gun quickly and shot the man without hesitation. As a result, Eko was recruited into the guerrilla group instead. Eko's cross, which was thrown on the ground by the Thug captain, was picked up by Yemi, who held onto it in anticipation of his brother's return. ("The 23rd Psalm")

Years later, Eko became a warlord and returned to the village with the intention of taking advantage of his brother to further a planned drug smuggling operation. He requested for Yemi to sign documents that falsely confirmed that Eko and his cohorts were priests. Though appalled be the very idea, Yemi complied. He accepted the drug money offered to him by Eko in return for signing the papers. Yemi then informed the Nigerian Army about Eko's gang's shipment of drugs, and was shot trying to save Eko from being shot. He was then loaded into the drug smugglers' plane while Eko was left behind. ("The 23rd Psalm")

The plane carrying Yemi crashed on the island in 2001. The crash was witnessed by a time traveling John Locke. Locke attempted to discover if there were any survivors but before he could he was shot in the leg by Ethan and continued moving through time. It is unknown whether Yemi was alive at this time or if he had already died from his gunshot wound. ("Because You Left")

After the crash of the plane (which Locke saw in his vision), Yemi, and Goldie (one of the Nigerian drug smugglers that worked with Eko) died. Yemi's corpse was found on the island when the Drug smugglers' plane was discovered by Boone and Locke. Eko found the plane later on, recognized his brother and took his cross back. Eko burned the plane on a pyre, saying the Psalm 23. His body goes missing sometime between "The 23rd Psalm" and "The Cost of Living".

At this point, The Man in Black had begun to impersonate Yemi. He appeared in Eko's dream, and instructed him on how to find the "?" with Locke. He later appears in Locke's dream to guide them to the top of the cliff, where they can see the question mark, thus leading the two of them to discover The Pearl.

Seven days later, the Man in Black appeared to Eko as Yemi once more, telling him that it was time for him to confess his sins. Locke's hut caught fire, leaving Eko inside, but he is rescued by Charlie, Hurley and Sayid. Eko went back to the plane and moved rocks only to discover that Yemi's body was gone. Feeling discouraged and helpless, Eko encountered The Man in Black who was posing as Yemi again. The Man in Black, who's Yemi impersonation was now wearing a dirty suit, told Eko once more that it was time to confess. Eko followed him to an anemone field, and said that he feels no guilt for what he did and refuses to ask for forgiveness; Eko explains that he did not ask for the difficult life he was given that forced him to become a violent man. The Man in Black stalked away after uttering "You speak to me as if I were your brother"; Mr. Eko followed him, screaming "Who are you?!" at the Man in Black, just as he transformed into the smoke monster. He then attacked and killed Eko. ("The Cost of Living")

When a time traveling Locke revisited the plane, Yemi's body was seen inside. ("Because You Left")

For fan theories about these unanswered questions, see: Yemi/Theories

Retrieved from "https://lostpedia.fandom.com/wiki/Yemi?oldid=1115767"
Community content is available under CC BY-NC-ND unless otherwise noted.