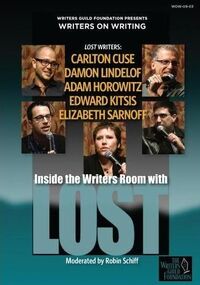 Writers on Writing - Inside the Writers Room with Lost is a discussion with the producers Damon Lindelof and Carlton Cuse and writers Edward Kitsis, Adam Horowitz and Elizabeth Sarnoff.

"Inside the Writers Room with Lost is a special panel discussion with the creators of the phenomenally popular ABC television series. Producers Damon Lindelof and Carlton Cuse and writers Edward Kitsis, Adam Horowitz and Elizabeth Sarnoff talk about the story development and writing process on one of the hottest TV series in years."
"Writers on Writing is a series of one-on-one (or in some cases, one-on-several) DVD interviews with Writers Guild Foundation moderators about the exceptional careers of some of the top screenwriters working today."
"Lost is one of the hottest and most acclaimed television dramas in years. Join the Writers Guild Foundation for an in-depth panel discussion on the show with producers Carlton Cuse, Damon Lindelof and producer-writers Elizabeth Sarnoff, Adam Horowitz and Edward Kitsis."

Retrieved from "https://lostpedia.fandom.com/wiki/Writers_on_Writing_-_Inside_the_Writers_Room_with_Lost?oldid=1075350"
Community content is available under CC BY-NC-ND unless otherwise noted.