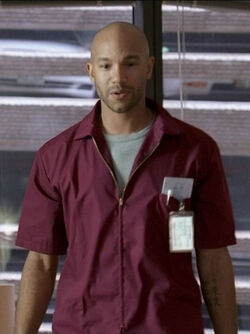 William Kincaid was a physiotherapist based out of a California hospital.

In 2000, he was assigned to help John Locke adjust to life in his new wheelchair. Ever an optimist, he referred to Locke as "buddy" and refused to let him put himself and his abilities down.

Retrieved from "https://lostpedia.fandom.com/wiki/William_Kincaid?oldid=1095291"
Community content is available under CC BY-NC-ND unless otherwise noted.