The Widmore family is a prominent, wealthy, and powerful clan in the Lost universe. Owners of the Widmore Corporation, the family has its origins from the Island of Islay in Scotland. A possibly separate, fictional Widmore family is the focus of the Lost tie-in novel Bad Twin, with private investigator Paul Artisan hired to find Zander Widmore by his twin brother Cliff Widmore. During the novel, a number of secrets emerged about the affluent family, including adultery, murder and deceit.

In the Official 'Lost' Podcast/May 08, 2006, Carlton Cuse states he "heard a rumor" that there are two branches of the Widmore family: an American one and a British one. This supports the information in the Bad Twin novel, which arguably could be seen as fiction even in the Lost mythos (it was supposedly written by real character Gary Troup).

Charles appears to be in charge of the Widmore Corporation in the United Kingdom. He disapproved of his daughter, Penelope, having a relationship with Desmond Hume and tried to force Desmond to never see her again with a bribe. He also refused to give his blessing when Desmond wished to marry Penny. In response, Desmond would later participate in a worldwide sailing competition sponsored by Charles, in order to gain his honor back. In doing so, Desmond arrived on the Island having been shipwrecked.

Charles has since been revealed to be a former leader of the Others.

Heiress to the Widmore Corporation, and daughter of Charles, Penelope was romantically involved with Desmond. However, he abruptly left her one day with Penny attributing the breakup to Desmond's cowardice. She believed that Desmond had forgotten about her after he was imprisoned, though his letters had been intercepted by her father, who had always disapproved of their relationship. After Desmond was freed, he promised Penny that he would be back after his trip around the world, and asked her to wait for him (despite the fact that she was engaged to be wed with another man). After Desmond crashed on the Island, it appears that Penny tried to look for him, hiring individuals to find where his ship had crashed.

Penny's warmth and charm set her apart from her cold father, though she does embody some of her affluent family traits, such as believing that "with enough money and determination, you can find anyone."

Charles' son-in-law and husband of Penny. Charles disapproved of Desmond and his relationship with Penny, and after Desmond was sent to prison, began intercepting his letters to Penny to make her think he had forgotten her. When he was released from prison, Charles tried to bribe him into staying away from Penny. In 2001, when Charles arranged a large boat race around the world, Desmond competed to win Penny back, but his trip was cut short when he crashed unto the island, where he remained for three years. Subsequently married Penny and travelled with her and their newborn son, Charlie. Several years later, in 2007, he was kidnapped by Charles and taken back to the island, seemingly without Penny knowing of it.

Son of Desmond Hume and Penelope Widmore. He was born in the Philippines a year after Desmond left the island. He was named in honor of Desmond's friend Charlie Pace rather than his grandfather Charles Widmore.

Physicist and former Oxford professor who was sent on the Kahana freighter to the island by Charles Widmore. Daniel was the illegitimate son of Charles Widmore and Eloise Hawking and the half-brother of Penelope Widmore. Daniel and others on the island were sent back in time to the year 1974. 3 years later he was murdered by his mother after infiltrating the Others camp and pointing a gun at Richard Alpert.

Charles former lover and colleague on the Island. Left the island sometime during the late 70s/early 80s to raise hers and Charles son, Daniel.

Other prominent Widmore family members featured in Bad Twin include:

As stated, it is unclear whether the Widmore family represented in Bad Twin are based on actual people or fictional constructs based on the real family. The book does refer to other "real" characters, however, including Alvar Hanso and Thomas Mittelwerk.

Below is an attempt to clarify the Widmore family, assuming the characters in Bad Twin are real, (as they could indeed be fictional even in the Lost mythos): 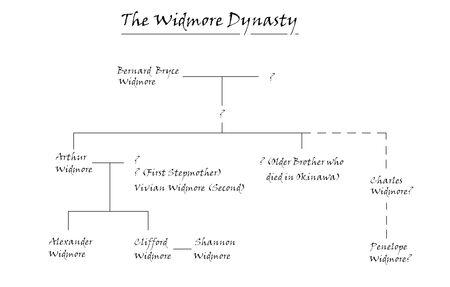