Several paintings owned by Charles Widmore are depicted in Lost.

"Flashes Before Your Eyes" and "Jughead"

Several paintings in Widmore's office are seen these episodes.

One painting, in a style reminiscent of the mural painted on the Swan's wall on the Island, has polar bears, an inverted Buddha, mountain peaks, the word Namaste, the Statue of Tawaret before demolition on it. Also, the painting feels that the island is under the water as in "LA X, Parts 1 & 2". It and the third painting are on the wall opposite of the bar. Many viewers initially thought that the Namaste was written backwards. In the actual filming and the majority of the scene, the painting appears to Desmond's left, with Namaste written correctly. In initial shots the film was reversed, causing the painting to appear on Desmond's right with Namaste written backwards. It is unknown if this was intentional or not.

This painting (or print) is one of Thomas' paintings that was in Thomas and Claire's apartment in Australia ("Raised by Another"). [1] It hung on the same wall as the bar. (see below for explaination)

This and the namaste painting are on the wall opposite of the bar. It is of the Incident Room, possibly depicting the Incident itself.

"The Constant" and "The Shape of Things to Come"

During the auction of the Black Rock ledger at Southfield's, a painting of the ship Black Rock, unofficially known as Black Rock Storm, is prominently displayed. ("The Constant") Four episodes later, the same painting is shown hanging in Charles Widmore's residence, when Ben makes a threatening visit. ("The Shape of Things to Come") Two other paintings are also visible hanging in the residence at this time, one a landscape, and the other a portrait of two abstracted figures that has been confirmed as being painted by executive producer Jack Bender (see "third painting", bottom left) [2].

Two paintings of scales with white and black rocks are seen. One has a black frame, the other had a white frame.

"Flashes Before Your Eyes", "The Lie" 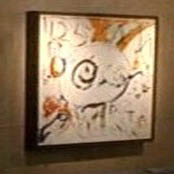 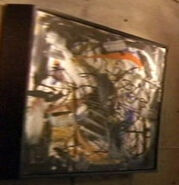 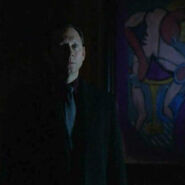 The "Black Rock Storm" "The Constant"

"The Constant", "The Shape of Things to Come"

"Happily Ever After"
Add a photo to this gallery

Retrieved from "https://lostpedia.fandom.com/wiki/Widmore%27s_paintings?oldid=1038781"
Community content is available under CC BY-NC-ND unless otherwise noted.