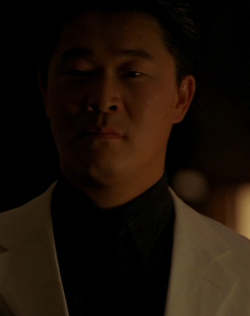 White Suit is the name given to one of Mr. Paik's henchman.

After Jin was unable to deliver a message to Byung Han, an angry Mr. Paik sent Jin along with White suit, so that Jin could learn how to "deliver a message." Upon reaching Han's residence, while preparing a silenced pistol, White suit instructed Jin to wait in the car until he returned, at which point they woud drive normally to a riverbank. Jin, fearful that something terrible was going to happen, stormed into Han's residence instead, beating him into submission, telling Han that he "saved his [Han's] life." He then left, telling white suit that Han had gotten the message.

Retrieved from "https://lostpedia.fandom.com/wiki/White_suit?oldid=1095645"
Community content is available under CC BY-NC-ND unless otherwise noted.