Start a Wiki
"Whatever Happened, Happened" 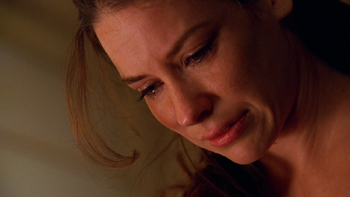 "Whatever Happened, Happened" is the eleventh episode of Season 5 of Lost and the ninety-seventh produced hour of the series as a whole. It was originally broadcast on April 1, 2009. Kate struggles to save a young Benjamin Linus from a gunshot wound at all costs.

Kate carries an infant Aaron to the door of Cassidy's house. ♪♪ The two women reunite, and Cassidy speaks of seeing Kate on the media coverage of the Oceanic Six. ♪ Kate reveals that Sawyer's whispered request on the helicopter was to find Cassidy and his daughter Clementine, and make sure they were cared for. She hands an envelope of money to Cassidy and talks to her about Sawyer, telling her the story of what really happened on the Island. Cassidy says that Sawyer was a coward and only jumped off the helicopter because he couldn't face a future with her (Kate). ♪

Three years later, during the events of "This Place Is Death", Kate leaves the marina where the survivors gathered with Ben and stops at a grocery store to buy milk for Aaron. While at the store, her cellphone rings. Caller ID indicates Jack Shephard. She ignores it but, distracted, she briefly loses Aaron and finds him walking with a woman, who from behind looks like Claire. Kate is reunited with Aaron at the store, and goes to visit Cassidy again. Clementine answers the door, greeting her as "Auntie Kate." Cassidy counsels her that she is scared that Aaron will be taken because she took him. She says Kate kept Aaron to heal her broken heart from Sawyer. ♪

Kate visits Carole Littleton and tells her that she has a grandson named Aaron, that Claire survived the crash and that she claimed Aaron as her own to protect him and because she needed him. ♪ She tells Carole that she had checked into the motel and that Aaron is sleeping in a room two doors down. She adds that she's told him she's leaving him with his grandmother while she's away. She then tells Carole that she's going back to the Island to find Claire and bring her back to her son. ♪ As Aaron is sleeping, Kate tearfully says goodbye to him and leaves the motel room. ♪

Jin regains consciousness and finds Ben's bleeding body. ♪ He places him in the van and heads back to the Barracks.

At the Barracks, Horace briefs the gathered DHARMA personnel on the prisoner's escape. ♪ When Jack steps forward to ask questions, Horace regards him suspiciously and states that the prisoner must have had help from "one of us" since no Hostiles were seen crossing the fence. Later, Roger Linus approaches Kate and asks for her help operating a winch to move the burned DHARMA van. Roger and Kate seemed to have a connection as they talked. Jin arrives and, as he carries Ben to get aid, Roger sees his injured son and runs after them.

As Sawyer examines the security monitors, Kate approaches him to ask what happened to Ben. A suspicious Horace arrives and discovers them talking. Horace finds a janitor's set of keys still in the lock of the holding cell. He states that there are only three people with these kinds of keys, including Roger and the new arrival Jack. Seeing that things are spiraling out of control, Sawyer orders Miles to keep Jack, Kate, and Hurley in a house and keep his eyes on them in order not to complicate matters. Sawyer approaches Roger to ask for his keys. Roger says he must've left them at home. Juliet tries to save Ben, but he won't stop bleeding. ♪ In a house, Hurley and Miles try to figure out the consequences of Ben's shooting and time travel. Sawyer tries to recruit help from Jack, but he refuses telling Kate that he already saved Ben once, and he did it for her. Jack claims that he's done trying to fix things and now puts his trust in the Island. ♪ Kate remarks that she doesn't like the new Jack, but Jack reminds her that she didn't like the old him. ♪

Kate arrives at the infirmary and donates blood to keep young Ben alive. As Kate and Roger sit at Ben's bedside, he admits that he may not have been "the world's greatest father" since Ben stole his keys because of him. ♪

Inside the house, Hurley is trying to understand the unanswered questions of time travel. Miles explains to him that they are in their present while everyone else are in their past. Hurley wonders why a future Ben couldn't remember that Sayid, the guy who tortured him in the future is the same guy who shot him in his past. Miles has no answer.

Juliet is able to stabilize Ben, but can't heal him. Juliet tells Kate that the Others may be able to save his life. She secretly helps Kate load Ben into a van, and Kate drives out to the sonic fence. Sawyer catches up with her and helps her rather than stopping her. He says that he's doing it for Juliet--because Juliet feels it's wrong to let a child die. ♪ Juliet bursts into the house, dismisses Hurley and Miles, and confronts Jack as he's getting out of the shower. She asks why he came back and why he refused to help Ben. Jack responds that he was supposed to come back, but doesn't know why yet.

Kate and Sawyer carry Ben into the Others' territory. Stopping by a stream, she tells him about Cassidy and Clementine ♪. They discuss their relationship, and Sawyer says he and Kate would not have lasted. He says he's grown up in the past three years. A group of Others surround them, and Sawyer demands to be taken to Richard Alpert.

The Others escort Sawyer and Kate into the jungle, where Richard emerges. Richard recognizes Sawyer, but asks why Kate is there. After Sawyer asserts that Kate is with him, Richard asks if the boy is Benjamin Linus. Sawyer asks if Richard and Ben have met, which Richard does not respond to. Richard explains if he takes Ben, he will not remember any of this, will lose his innocence, and will "always be one of us." One of the Others tries to stop Richard from taking Ben, saying that Ellie and Charles won't be happy, but Richard responds by saying that he doesn't answer to them.

After Kate hands over Ben, Richard carries him through the jungle alone. ♪ He approaches the wall of the Temple, passing by a large hole in the ground. After a pause, Richard pushes open a stone door and takes him inside.

In the makeshift infirmary in the Hydra, Ben wakes up to find John Locke looking at him. As Ben's eyes widen in surprise, John welcomes him back to "the land of the living." ♪

The Season 5 soundtrack includes the track "Your Kharma Hit My Dharma" from this episode.

Retrieved from "https://lostpedia.fandom.com/wiki/Whatever_Happened,_Happened?oldid=1113946"
Community content is available under CC BY-NC-ND unless otherwise noted.