This article is about the episode. For the magazine issue, see "What Kate Did" (magazine) 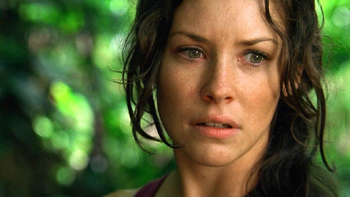 "What Kate Did" is the ninth episode of Season 2 of Lost, and the 34th produced hour of the series as a whole. Kate begins to believe that she is going mad after she sees a black horse on The Island similar to one from her past, and hearing her father when speaking to Sawyer. Meanwhile, Eko shows Locke an interesting item.

A 24-year-old Kate is sitting on a porch, playing with a cigarette lighter, when her father, Wayne Janssen, arrives inebriated. As Kate helps him to bed, he complains and makes advances toward her. Kate soon leaves. As Kate rides away from the house on a motorcycle, the house explodes.

She rides to a diner where her mother, Diane Janssen, works. ♪ Kate confronts Diane about an injury caused by Wayne and then presents her with a homeowners' insurance policy, telling Diane she'll be taken care of. Despite worried pleas from her mother to explain what she did, Kate leaves, fighting back tears.

Later, as Kate is trying to buy a bus or train ticket to Tallahassee, she is arrested by U.S. Marshal, Edward Mars. He says Kate's mother turned her in. ♪

On a country highway during a rainy night, Mars is driving a handcuffed Kate to her arraignment in Iowa. He questions why, with no previous criminal record or history of violence, she would choose to kill Wayne now. Suddenly, a black horse passes in front of the car. Kate shouts "Look out!" and after swerving to avoid hitting the animal, the car hits a pole. With Mars momentarily stunned by the opening of the driver's airbag, Kate grabs the handcuff keys and tries to unlock the handcuffs, but the marshal revives. After a short fight, Kate kicks Mars out of the car. She reverses the slightly damaged car and turns on the headlights and drives away. To her surprise, the lights show the black horse standing next to the road quietly looking at her for a few seconds before leaving into the darkness. ♪

Kate visits a U.S. Army recruiting station and meets Sergeant Major Sam Austen, the man she believed to be her biological father. She tells Sam she recently discovered he was her stepfather and Wayne was her biological father. Sam says he had known all along, but hid the truth because he knew Kate would kill Wayne if she ever found out. He informs Kate that he must call the authorities, but gives her a one-hour head start. ♪ In the background of the recruiting station, a TV set is playing and a shot of Sayid can clearly be seen for two seconds.

In the morning light, Jin comes out of his tent with no shirt on, followed by a smiling Sun. As she hugs him, Hurley gives Jin a thumbs up from his nearby shelter. Sun turns to look down the beach and sees Sayid digging a grave for Shannon. ♪

In the Swan, Jack watches over a semi-conscious Sawyer, who mutters, "Where is she?" which Jack assumes refers to Kate. Sawyer whispers, "I love her" twice, stunning Jack into silence.

While collecting fruit in the jungle, Kate is shocked to see a black horse standing in the undergrowth. She returns to the Swan to attend to Sawyer and the computer so Jack can attend Shannon's funeral. On the beach, Eko comforts Ana Lucia, saying most of the survivors realize Shannon's death was accidental, but she decides to avoid the funeral. At the funeral, Sayid tries to say a few words, but, overcome by emotion, can only declare that he loved her before walking away. Jack, Locke, and the other survivors continue the improvised ceremony by each pouring a handful of sand into the grave. ♪♪

In the Swan, Kate plays a record of "After Midnight" by Patsy Cline and tells the sleeping Sawyer she thinks she saw a horse outside. Sawyer begins to mumble, and as she leans in to hear better, he grabs her by the neck and says, "You killed me. Why did you kill me?"

Jack and Locke return to the Swan to find the alarm blaring, Sawyer on the floor, and Kate nowhere to be seen. With only 23 seconds to go, Locke hastily enters the Numbers, resetting the clock to 108.

Outside, Kate bumps into Charlie in the woods and asks if he thinks there are horses on the Island. He replies that he has seen polar bears and heard monsters, but never horses, and they part ways. Back at the beach, Charlie meets Jack and tells him where to find Kate.

In the Swan, Locke uses bolt cutters to finally remove the handcuff Jin has worn on his right hand since attacking Michael weeks previously. After Jin leaves, Michael asks Locke about the blast door in the ceiling, which Locke admits he had not noticed.

Jack tracks Kate down and accosts her for leaving the Swan. Kate shouts, "I'm sorry I'm not as perfect as you. I'm sorry that I'm not as good!" She tries to run away, but Jack grabs her forearm and pulls her back. With emotions reaching a fever pitch, Jack pulls Kate close and holds her. Without warning, Kate kisses Jack passionately and, seemingly shocked by her actions, runs off into the jungle. ♪ Jack calls after her, but she does not turn around and he does not follow.

Locke shows the DHARMA Orientation film to Michael and Eko and says he has set up two-person shifts every six hours to enter the code. When Locke asks Eko what he thinks, Eko leaves without saying a word.

Sayid goes to Shannon’s grave to place his prayer beads on her cross; he discovers Kate sitting there. She apologizes for missing the funeral and says she thinks she's going crazy. When asked if he believes in ghosts, Sayid says he saw Walt in the jungle just before Shannon was shot and asks if that makes him crazy too.

Locke demonstrates to Michael that the keyboard only works when the alarm sounds - Michael asks to inspect the equipment and Locke hesitantly agrees, but only if he doesn't break it.

Eko calls Locke aside and, after leading in with a story about Josiah and the book found during Josiah's rule, reveals a hollowed-out Bible which contains a small reel of 16mm film. The book was found by the tail-section survivors in the DHARMA bunker they inhabited on the other side of the Island. Locke unrolls part of the reel and recognizes Dr. Marvin Candle, the narrator from the original film.

In the jungle, Jack is cutting wood when Hurley approaches, making small talk, eventually leading into the topic of Sawyer. Hurley asks Jack if he is mad at Sawyer, which Jack denies.

Kate returns to the Swan and relieves Sun, who has been tending to Sawyer. Kate asks Sawyer if he can hear her, first saying "Sawyer?" then "Wayne?" Sawyer stirs and mumbles inaudibly. Kate, believing that Wayne's ghost has possessed Sawyer's body, confesses aloud that she killed him after finding out he was her biological father. It was too much for her to bear to know that the man who she hated would always be a part of her. Furthermore, whenever she had feelings for Sawyer she couldn't help remembering Wayne. ♪ Following Kate's confession, Sawyer awakes as his normal self, and his comments reveal he has heard the whole conversation. Kate is embarrassed but relieved. ♪

Locke discovers that the film found in the bible was cut from the original Swan orientation film; Eko and Locke splice the film back into the main film reel. Locke marvels at the odds of them finding the missing piece, but Eko advises him not to "mistake coincidence for fate."

Sawyer believes that they had been rescued, seeing the kitchen, beds, and such in the hatch. Kate shows Sawyer around the Swan, before taking him outside to prove they have not been rescued. The two talk until something catches Sawyer's eye; Kate turns to see what he is looking at and sees the black horse standing nearby. Kate asks Sawyer if he sees it and Sawyer says he can. Kate approaches and pets the horse before it walks back into the jungle.

Back at the beach, Jack approaches Ana Lucia, who is sitting carving a stake with her hunting knife. Jack offers her one of three miniature bottles of Tequila, recalling their first meeting at the airport. They commiserate, smile, and share a moment together.

Locke and Mr. Eko watch the missing section of the film, in which Dr. Candle expands on his warning that the computer is to be used only to enter the code. He explains that while the isolation of Station 3 may tempt one to use the computer to communicate with the outside world, such action would compromise the integrity of the project and may lead to another "incident."

At the same time, as Michael examines the computer equipment, he hears a beeping from the terminal and goes to inspect. He notices there are still 51 minutes remaining on the timer and the text "Hello?" is shown on the screen. Unlike Locke's attempt earlier, Michael is able to enter text and types "Hello?" A moment later, "Who is this?" appears and Michael responds, "This is Michael. Who is this?" After a few seconds, "Dad?" appears on the screen. Michael is stunned to see this. ♪

The Season 2 soundtrack includes the cue "Shannon's Funeral" from this episode, a statement of Shannon's theme.

For fan theories about these unanswered questions, see: What Kate Did/Theories

Retrieved from "https://lostpedia.fandom.com/wiki/What_Kate_Did?oldid=1114921"
Community content is available under CC BY-NC-ND unless otherwise noted.