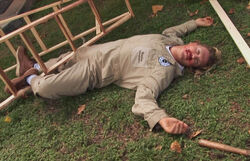 Wayne was a DHARMA Initiative cartographer. He was one of the crew member helping the new recruits in the Processing Center in 1973, and later killed during the purge.

When the new DHARMA members arrived the Island, Wayne was seen inside the Processing Center, sitting in the counter and helping the new recruits. Later, during the 1973 Barracks battle, he was seen running in the Barracks by Olivia, when young Ben and Annie were having their lesson. ("The Man Behind the Curtain")

Before the purge, Wayne was seen in the Barracks, walking with a big pack of beer. When the purge occurred, he was standing on a ladder, hammering something. However, he died as a result of the toxic gas, and fell, dropping his hammer and becoming entangled in the ladder. ("The Man Behind the Curtain")

Retrieved from "https://lostpedia.fandom.com/wiki/Wayne_(DHARMA_Initiative)?oldid=1118557"
Community content is available under CC BY-NC-ND unless otherwise noted.