This article is about the episode. For the company that hosted the Outback tour, see Melbourne Walkabout Tours. 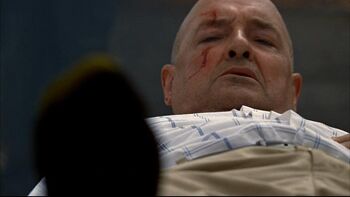 "Walkabout" is the fourth episode of Season 1 of Lost. As food supplies run low, John Locke emerges as the hunter after the survivors learn there are wild boars near camp. Meanwhile, the survivors realize that they must somehow get rid of the rotting bodies from the fuselage. The flashbacks in this episode depict Locke's plans to get to Australia and participate in a walkabout tour.

Locke is at work when he receives a phone call asking for "Colonel Locke." Locke recognizes the person's voice and agrees to meet him at 13 hundred hours (1300 military time or 1:00 p.m.) in the "usual rendezvous point." His manager, Randy Nations, walks by soon after, griping that he needs Locke's TPS reports. Before he leaves, he comments that he heard Locke's phone call, saying "Colonel" smugly.

The "usual rendezvous point" is actually the staff lunch area, where Locke and his coworker play an army strategy board game. Randy arrives and once more belittles Locke. He reveals that he has read Locke's personal file, as well as documents on his desk about going on a "walkabout." His coworker asks if Locke would be telling "Helen" about his trip as Randy laughs at the idea of Locke actually having a girlfriend. He says that Locke should stop kidding himself because he can't do any of these things. Locke replies, "Don't tell me what I can't do." ♪

Locke speaks on the phone with a woman he calls Helen, ecstatically discussing his upcoming walkabout. He asks her if she'd like to accompany him on his walkabout in Australia. Seeming annoyed, the woman says that she is not allowed to meet customers and suggested he find a therapist. Much to Locke's dismay, she ends the call. ♪

In Australia, Locke is prepared for his walkabout. However, the guide refuses to allow Locke admittance, on account of his "condition" which he had neglected to mention. As Locke moves away from the counter, it is revealed that Locke is a paraplegic in a wheelchair. Locke states that he "can do this" but the guide bluntly says, "No, you can't", before leaving. As the bus departs for the walkabout, Locke shouts out the window to never tell him what he can't do.

In the aftermath of the Oceanic Flight 815 crash, Locke wakes up on the beach, surrounded by screams. However, his attention is soon drawn to his feet as his toes wiggle. He realizes he is no longer paralyzed. Getting to his feet, he is called on for help by Jack to free another survivor. ♪

At night on the beach, all the castaways look over as Vincent barks loudly. However, another noise soon catches their attention, as rustling and roars are heard emanating from the fuselage. Jack moves to investigate with the rest of the group, but the creatures inside begin to move towards them, and the group runs for their lives. With the whole camp flustered, Locke steps forward to provide an explanation: the creatures are in fact wild boars.

Still a little shaken, some of the survivors discuss the situation in the fuselage. The remains of the dead are rotting in the sun, not to mention attracting wildlife. Jack puts forward the harsh truth that the bodies should be burnt, much to the dismay of Sayid, who points out that this act would show no regard to the individuals' wishes or beliefs about death. Jack, however, is undeterred. He states that the fuselage itself will be burnt at sundown the next day, which will also provide a strong signal fire that night for possible rescue.

In the morning, Kate finds Sayid, who is working on trying to make antennas to triangulate the distress signal that they heard previously. Meanwhile, Hurley and Sawyer fight over the contents of a backpack, which contains the last of the peanuts. The group realizes that they have exhausted all of the food from the plane and face the prospect of starvation. As Sawyer mocks Sayid's idea of finding food on the Island, a knife hurtles towards him, hitting a seat, (which is part of the plane wreckage) right next to his head. Locke stands up, suggesting that they hunt the boars that attacked them. With the help of two others, he plans to kill the piglets, which would provide food and allow the mother to continue living to possibly breed more in future. As Jack and the rest of the group agree, Locke reveals the case he checked in when boarding the plane, which is full of hunting knives. ♪

Kate prepares to join the hunting mission, and Jack asks her why she is always so willing to sign up for outings into the jungle. She reveals that Sayid had given her an antenna to try to isolate the distress signal, which she is going to use when further inland. Michael is also gearing up for the trek and asks Sun to watch Walt. Despite not speaking English, she understands quickly what Michael is asking and agrees to look after him. Walt objects to not being included, but Michael tells him that this is an opportunity to get to know Locke better. Elsewhere, Claire asks Jack about a possible memorial service before they burn the fuselage, but she is abashed when Jack coldly responds, "Look, it's not my thing."

Boone speaks to Shannon about Rose, a woman who lost her husband in the crash. She sits staring out at the water all day, and Boone is worried that she is suffering from some kind of shock. Shannon shows little interest, however, and the two argue about her not caring about others, despite the fact that she is relying on them for food. Shannon says that she can look after herself, and Boone smirks at the idea that she could catch fish for herself. Soon after, Shannon finds Charlie in the jungle and uses her charm to make him try to catch a fish for her. Meanwhile, Boone asks Jack to speak to Rose, on account of him being the man who saved her life after the crash. He reluctantly obliges, but Rose gives him no reply as he tries to chat with her.

In the jungle, Locke tracks the boars' movements while Michael explains to Kate that Walt lived with his mother until her death two weeks ago; he and Walt had very little contact prior. They suddenly happen upon one of the boars, but when Michael speaks loudly as Kate and Locke silently approach, the mother boar charges at them in fear. Michael is injured, with Locke also winded. Kate asks Locke if he is all right, and he calls her Helen in a Freudian slip. While Kate tends to Michael, Locke says that he will find the boar alone, and states, "Don't tell me what I can't do" when Kate doubts him. ♪

Charlie and Hurley try to catch fish with a stick to little avail, as the tides throw them back. Meanwhile, Claire finds Sayid, giving him a letter she found with his name on it. Inside are photos of a young woman. Up the shore, Rose finally begins talking to Jack, and he reveals amongst other things that he only became a doctor as a result of medicine being the "family business." ♪

As Kate and Michael head back, she climbs up a tree to attach the antenna. However, before she can finish, she hears the sounds of the Monster, causing her to drop and break the equipment. The Monster heads straight for Locke, who stares straight at it. ♪

Sawyer offers Claire some diaries and documents he found previously, and Michael arrives back at camp with Kate. Charlie also arrives back from his own hunt, giving Shannon a fish he eventually managed to kill. Boone and Shannon argue once more about her using people to get her own way, however, and Charlie realizes that she used him. Elsewhere, Jack and Rose move from their spot back to the camp to prepare for the memorial. He comments that she could say something about her husband, but he is shocked to hear Rose claim that she believes those in the tail section survived. ♪ Suddenly, Jack sees a man in a suit standing by the trees and is shocked into silence. On second glance, however, the figure is gone, and a confused Jack follows Rose back to camp.

Kate returns the broken antenna to Sayid, with the resolve that they will try again until they succeed. Jack arrives, and Kate reveals that Locke was right in the Monster's path and probably did not make it. However, Jack once again sees the man in a suit and runs into the jungle, with Kate at his heels. Instead of the figure, however, they find Locke, who brings with him a dead boar. ♪

At sundown, Claire reads off the names of the dead, giving brief bits of trivial information she managed to glean from the documents in the wreckage. The only survivor not attending is Jack, who sits away from the service looking out at the sea. Michael appreciates Locke for hunting the boar and then asks Locke about the Monster, but Locke says that he did not see anything. ♪ Looking towards the fire, he sees his wheelchair silhouetted against the flame. ♪

The score to "Walkabout" starts off with the subtle introduction of one of Locke's themes, though it isn't fully developed until the end of the episode. After screeching action music for the boar attack and a long stretch without any scoring, Locke's primary theme is then introduced as he explains how they will hunt the boars. This latter piece appears on the soundtrack as "Crocodile Locke." Locke's later encounter with the monster introduces a danger motif.

Retrieved from "https://lostpedia.fandom.com/wiki/Walkabout?oldid=1116304"
Community content is available under CC BY-NC-ND unless otherwise noted.