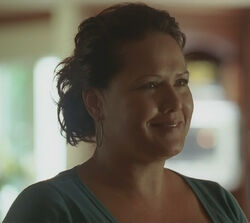 Veronica was Aaron's nanny who hired by Kate, and she was also the admitting nurse who helped Claire with her pregnancy of Aaron in Flash sideways.

Veronica was the nanny who hired by Kate, to take care of Aaron while she was on trial. One day after trail, Kate returned home and hugged with Veronica, who then told Kate that she had just put Aaron to bed, so Kate proceeded to go upstairs and check out on the sleeping Aaron. ("Eggtown")

Veronica continued to work for Kate as Aaron's nanny after Jack came to live with Kate. Veronica typically got off at 4, but one night, she worked late while Kate went out to do a favor for Sawyer, which eventually triggered the separation of Jack and Kate. ("Something Nice Back Home")

In the flash sideways timeline, Veronica was working as an admitting nurse at the Angel of Mercy Hospital. On 22 September 2004, Veronica was once again involved with Kate and Aaron, when she ushered Claire into the hospital for the pregnancy of Aaron, along with Claire's accompany Kate after their visit to Lindsey Baskum. ("What Kate Does")

Retrieved from "https://lostpedia.fandom.com/wiki/Veronica?oldid=1112660"
Community content is available under CC BY-NC-ND unless otherwise noted.