This article is about the character. For the guest star, see Vanessa Branch. 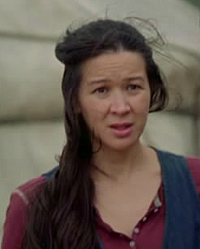 Vanessa was a member of the Others.

She informed Richard that Locke was coming, while Richard was working on a boat in a bottle. Later, she was seen again when Locke, Ben, and Richard came back from their expedition to the Beechcraft. ("Follow the Leader")

This group of Others later went to the Temple. ("The Substitute") Vanessa may have joined the Man in Black's group or was killed by him during his massacre ("Sundown"), or possibly escaped into the jungle. Her status following the mortar attack remains unknown. ("The Candidate")

For fan theories about these unanswered questions, see: Vanessa/Theories

Retrieved from "https://lostpedia.fandom.com/wiki/Vanessa?oldid=1106139"
Community content is available under CC BY-NC-ND unless otherwise noted.