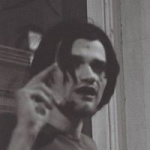 Hi there. To answer your question, get a photo of yourself (make sure the filesize isn't too big), click "Upload file" in left sidebar, clicke "Browse" and find the file in your computer, give it an appropriate name, and press Upload. Then, go into your edit screen of your user page and put in [[Image:Example.jpg|thumb|Caption|right]]. --Blueeagleislander 17:36, 17 November 2007 (PST)

Hi, just thought I would let you know that I reorganized a bunch of the topics/discussions at Talk:Lost: Missing Pieces, so hopefully you can find where I put all of your posts. Remember when you start a new topic, create a new section by clicking on the "+" at the top of the page between "edit" and "history"; this will make it easier for people to find relevant discussions. Thanks! -- Graft   talk   contributions  01:21, 22 November 2007 (PST)

Yes. I noticed. That's cool. Thank you. I'm trying to improve my wiki-skills. Any tip is always apreciated. I've actually never clicked that pluss-sign, but will do so from now on.--Mc peko 02:09, 22 November 2007 (PST)

Sorry, we had an edit conflict. I replaced your links, but kept the alphabetical order which I think not only looks better, but also the note that they don't need to be found in order. Did you find them all yet? I have 33 all 34 now :) -- LOSTonthisdarnisland 22:59, 19 April 2008 (PDT)

Nice table, great work! Sure, we can do that. I'll study the episodes carefully for clues as to the timeline and we can compare notes. About The Deal, that one takes place during the flashback events of Three Minutes but during the island events of Dave because there was a "3 days ago" caption in Three Minutes which using the timeline means it took place the night of Dave. Anyway, i'll study them and get back to you and then maybe we can add the table to the main mobisode page :) --Anfield Fox 02:42, 7 July 2008 (PDT)

Thanks for cleaning up some of my grammer on the walkthrough, there's a whole story behind it but I just wanted to thank you!-- SawBucks  Talk  Contribs  06:37, 21 January 2009 (UTC)

The stub banner is reserved for very short articles that are lacking extensive detail. While it may be missing an image or two (I'm on it), the page says about as much about the Enhanced episodes as is known. This article is not a stub. Robert K S (talk) 03:03, 12 March 2009 (UTC)

I see. In fact it's too big, which is why I vote for a split. I didn't remember the 'images needed' syntax. Looking forward to see the new captures. Do you know where I can get these enhanced episodes?--Mc peko 03:09, 12 March 2009 (UTC)

Thank you for adding the spoiler alert, only I was wondering what exactly you added it for. I didn't see or hear any spoilers when I watched the video... if you could just point me to the time in the video when a spoiler is shown/heard, that would be great. Thank you! ♥meggie ~ Talk & contribs 00:40, 24 April 2009 (UTC)

Retrieved from "https://lostpedia.fandom.com/wiki/User_talk:Mc_peko?oldid=605731"
Community content is available under CC BY-NC-ND unless otherwise noted.