Who Was In The Other Outrigger?

It is one of Lost's most asked questions, and the one it seems so few know the answer to.

It became a topic on social media in 2012 with Damon Lindelof attempting to 'bribe' US Presidential candidate, Mitt Romney with the answer if he discloses his tax return figures. Lindelof even teased us more recently at the Paleyfest LOST 10 Year Reunion in March 2014, refusing to give a specific answer; 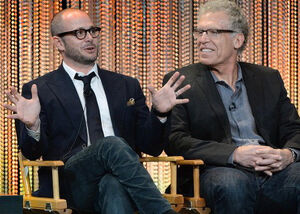 Well, if you're reading this, you won't have to wait till then as the answer is on this page. I've long been a proponent of the notion that most every question on LOST was answered. There are very few truly unanswered questions. It is true that some answers require some research or extrapolation/interpretation from a number of sources, but the vast majority of answers are there if you look hard enough. This is one such example. So, who was in the other outrigger?

It all happened in the Season 5 episode, "The Little Prince" which featured a number of time shifts ('bloops').

After a time shift, Sawyer's group found themselves in daylight and made their way to the beach. They found that the camp existed at that moment, but seemed dishevelled, with a number of the structures in disrepair and all the supplies either stolen or consumed. The group boarded an outrigger (canoe) they found at the beach and headed out into the water, planning to row closer to the Orchid Station.

During a conversation between Sawyer and Juliet (in which he tells her he'd seen Kate in one of the flashes earlier with Claire as she was giving birth in the jungle), six men are seen briefly in another outrigger when they opened fire. The outrigger crew missed hitting anyone in the canoe, but Sawyer's paddle did suffer some gunshots.

Sawyer's group paddled harder to escape, then Juliet returned fire with a rifle, hitting one of the pursuers. Before the battle escalated any further, another time shift occurred. Sawyer's group found themselves in the middle of a storm, but they successfully made it back to shore. None ever saw their attackers again.

The big question is, of course - who were these people?

If you've only ever watched the show and never indulged in either the DVD extras or gone online and done some of your own research, there is really no way of knowing (as it was never revealed in the show) that it was actually a crew from the Black Rock.

According to supplementary material in the final DVD compilation, six men from the Black Rock were also in the water, having travelled through time after leaving their main ship. Around December 15th, 1867, the Black Rock had become stuck inside the pull of the Island unable to escape. The crew of the ship began showing symptoms of time flashes. 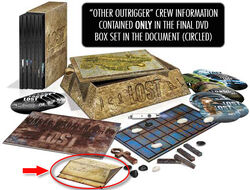 Juliet's gunshot did not kill her target, however, all but one of the sailors later jumped out of the outrigger to their deaths, evidently suffering from the same "cabin fever" that plagued the Kahana's crew. The sole survivor returned to the main ship. No further parties entered the water. A few days later, however, a storm began, sending the main ship crashing on to the Island. The entire crew died there. ("Ab Aeterno")

This level of detail all comes from a very specific source. It's barely glimpsed in the show, part 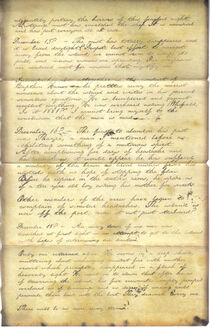 of the Black Rock ledger that Charles Widmore buys at the auction ("The Constant"), but a passage in the journal reveals the answer. The document in question is the Black Rock journal entry transcript.

The Re-visit in Season 6 That Never Happened

The producers originally planned to "close the loop" by revisiting the outrigger chase in Season 6. Incorporating the scene proved logistically challenging - according to Damon Lindelof, half the characters they'd originally envisioned as the attackers "had been killed off". Lindelof said that returning to the old mystery also interfered with the season's flow, diverting attention from subjects that mattered to the characters. Several scenes involving outriggers appeared nonetheless. Lindelof acknowledged that fans seeking answers could interpret the scenes as "taunting". He also joked on Twitter that Oprah was in the outrigger (May 25, 2011, from his now-deleted Twitter account).

So there you have it. Mystery solved. There continues to be speculation that it was other people, or that it was intentionally left unanswered (upsetting more than a few people), but hopefully, this article puts rest to all that. It's not helped by the fact that Damon Lindelof and Carlton Cuse intentionally pretend that the answer isn't already out there, teasing us with promises to reveal it one day, possibly as part of a charity auction.

Keen observers would also have picked up on the almost fatal flaw in this answer by the producers. There was indeed no bloop just before we saw the other outrigger and based on the state of the beach camp, we know it happens some time shortly after it had been deserted. But as they did not get a chance to re-visit the scene in the final season, they used the explanation that it was time flashes caused by the ship & outrigger being stuck just inside the pull of the Island. An acceptable, if slightly far-fetched answer.

Jorge Garcia is also on the record claiming the answer was in the original script (though he's never revealed who it was). It's evident, however, that answer had to change when they didn't revisit it, with the Black Rock crew invented to fill the blank.

One thing we will never know is the specific identities of all six people involved, however, it would seem those names would add no value anyway.

So, did you know the answer, or was this a revelation to you? Are there still big questions you feel are still unanswered? Feel free to comment below.