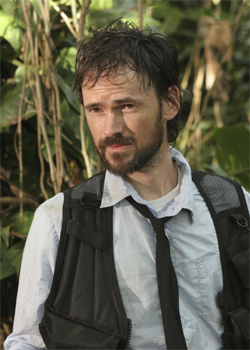 Daniel Faraday is a physicist and professor who parachuted onto the Island from a helicopter sent by the freighter.

In 1996, Daniel Faraday was a professor at Queen's College, Oxford University. He was conducting unauthorized experiments involving time travel, and had created a machine that allowed a living creature's consciousness to travel through time. When visited by Desmond Hume, who claimed to know about the machine, Daniel initially believed that a colleague was playing a practical joke on him, but when Desmond mentioned Eloise, Daniel's lab rat, he believed Desmond.

In his lab, Daniel tested the numbers Desmond supplied to him. He used the machine on Eloise, enabling her to inerrantly complete a maze that she would not be taught how to run for another hour. Daniel's blackboard revealed his interest in the Kerr metric as part of his theory of time-transported consciousness.

A being that undergoes time-transported consciousness, according to Daniel's explanation to Desmond, must identify a constant, something existing in both periods of time travel that can serve as an anchor for the being's consciousness; failure to find a constant results in instability of consciousness, and the resulting stress can lead to brain aneurysm and eventual death. At some point, Daniel identifies Desmond as his constant, noting so in his journal. ("The Constant")

Eight years later, Daniel lived in Essex, Massachusetts under the watch of a caretaker. When he saw a news report covering the discovery of the Oceanic Flight 815 wreckage, he became visibly upset, but could not say the reason. ("Confirmed Dead")

Shortly thereafter, he was recruited to a team, organized by Matthew Abaddon and led by Naomi Dorrit, that was sent to the Island aboard the freighter Kahana. ("Confirmed Dead")

While flying to the Island, the helicopter Daniel was traveling in encountered electrical problems and the passengers decided to bail out. Miles pushed Daniel out first. On landing he then encountered Jack and Kate in the jungle. He knew Jack's name from the conversation Jack had earlier with Minkowski. He explained that he lost his pack which contained his phone when he bailed out. Kate says that they have a phone and gives it to him. He calls Minkowski and says that the communications went dead when the chopper went dead. Minkowski asks Dan if he is on speaker and Dan then excuses himself to talk to him privately. When he was talking to Minkowski, Jack and Kate see the gun he is concealing. Dan explains that the rest of his team all have GPS units which are tracked by the phones. ("The Beginning of the End")  ("Confirmed Dead")

While walking through the jungle they find a metal box. Jack opens it up and finds a gas mask and other quarantine equipment. Dan says he cannot explain it, since he is not in charge of packing. Jack then abruptly asks him why he brought the gun for, prompting Dan to say that their primary objective isn't to save them. While beginning to explain what they were doing on the island, Miles' signal appears. They reach the cove where Miles appeared to be dead. Miles surprises Jack and points a gun at him. Dan tells him to stop, that they are good people. Miles says that Naomi used the code for if they had a gun to their head. Kate tries to get Dan's gun but Miles stops her. They end up going to Naomi's body where Miles "talks" to her to confirm that they didn't kill her.

Charlotte's signal then appears on the phone and Jack stops to tell them to put the guns down and that his friends are out in the jungle with guns to their heads. They don't believe him but then Juliet and Sayid shoot a couple of warning shots. Dan and Miles then give up their guns to Jack and Kate. They then go look for Charlotte. While in the jungle Sayid questions who they are. Dan tells him his name and that he is a physicist from Oxford. Miles says not to reveal his last name. Sayid takes Miles' phone to see that her signal is moving quickly towards them. Vincent then appears with the GPS tracker to reveal that Locke has her.

They then see Frank's signal. When they reach him they find him unconcious. He wakes up and says that he managed to land the chopper just over the hill and they see it nearly intact. Dan and Kate get Naomi's body and bring it back to the chopper. ("Confirmed Dead")

Daniel, tired of sitting around the helicopter, begins unloading pieces of equipment. He sets up a tripod with a guidance apparatus on top, and phones the freighter to ask for a 'payload'. He is visibly upset when it doesn't arrive when it is expected, and when the payload, a rocket, arrives later, the clock inside it has a different time than the one he had with him. He mumbles "31 minutes," presumably the difference between the two. He seems to be somewhat shaken, telling himself, "This isn't good." He later tells Lapidus that on his way off the island via helicopter that he should "stick to the exact same bearing as we came in" or else something was going to happen. ("The Economist")

After returning to the beach with Jack, Juliet, and Charlotte, Daniel investigates the island pantry, looking at various foods. He and Charlotte then proceed to play a memory game involving playing cards. After only getting two out of three cards guessed correctly, he feels he is making no progress. He and Charlotte are then questioned by Jack and Juliet about the satellite phone, and learn that Frank, Sayid, and Desmond have not made it to the freighter yet. ("Eggtown") Jack questions Daniel some more about the helicopter, and Daniel states that there could be "side effects," if Desmond has been exposed to electromagnetism or radiation. He asks to speak to Desmond, and manages to for a brief moment, where he tells Desmond to find himself in the flashes. He is later seen on the beach, leafing through his diary. He then reads what he had written himself back in 1996: "If anything goes wrong, Desmond Hume will be my constant." ("The Constant")

He then ventured with Charlotte, to go to The Tempest, in order to shut it down and avoid the possible threat of toxic gas being spread. On a rest stop at a river, they are confronted by Kate, who searches through their pack and finds a gas mask. Immediately becoming suspicious, Kate is knocked out by Charlotte as a preemptive measure. Dan and Charlotte continue on to The Tempest, breaking in by sparking the wires outside the door. While Daniel struggles to stop the gas, he is confronted by Juliet, who is subsequently knocked into a brawl with Charlotte. With minutes to go and his gas mask ripped off, Daniel frantically types onto the keyboard, stopping the disaster with seconds to spare. He remarks that it was "a close one." He then stays behind to shut down the station while Juliet and Charlotte leave. ("The Other Woman")

As Dan is looking in his pack, he is approached by Sun. She tells him she is pregnant and he congratulates her. She then asks him if they're here to rescue the Losties and he stutters for an answer. When she gets alarmed, he tells her that, "It's not my call." She walks away, convinced they're not here to rescue them. ("Ji Yeon")

For fan theories about these unanswered questions, see: Dt7/NewCharInfobox/v2/Theories

Retrieved from "https://lostpedia.fandom.com/wiki/User:Dt7/NewCharInfobox/v2/Daniel_Faraday?oldid=472826"
Community content is available under CC BY-NC-ND unless otherwise noted.