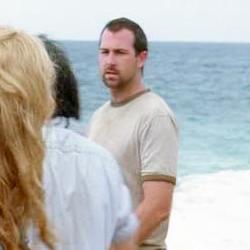 Steve Jenkins is one of the background middle section survivors of Oceanic Flight 815. His character, along with that of Scott Jackson, was a running joke in the scripts of LOST, as they were often confused for each other. His character is more prominently featured in the story entitled Lost 4Ever, created by Lostpedia user Crash815. The first episode where his name was used was "The Moth". He also appeared in the novel "Secret Identity".

In the early hours of the morning, around 5:30, Steve heard Michael and Walt arguing in the hall of the hotel. (Exodus) While leaving the hotel with Scott, later, he saw Tracy and winked at her. (Gate 23)

By his own account, Steve woke up in the jungle after the crash. On his way to the beach, he found Jason Ward, who was barely alive. Jason died shortly after Steve found him, so Steve left his body in the jungle, where Michael and Dexter found it. (Sibling Rivalry) That night, Steve and Scott asked for Rose's help with something that took her away from Sophia. (Flight 815) A week later, Steve, along with Scott, were recruited by Michael to help save Jack after a cave-in. (Picture Perfect) Later that day, on his way back to the beach with Scott and Amon, Steve told them of his experience right after the crash, involving Jason. (Sibling Rivalry) Days later, at the caves, Tracy asked Steve what happened to Howard, as he was covered in sweat. A few days later, early in the morning, Steve and Scott went looking for Claire's attacker with Hurley. (Mother's Day) Almost two weeks later, Steve stood with Tracy at Scott's funeral. (Life Support)

After Sun's attack, Steve argued with his fellow survivors about the situation. Steve argued the point that no one was questioning if Jack was telling the truth, but they were questioning whether the Others would keep their word. (Let It Go)

Steve helped carry the ping-pong table from the jungle to the beach. (Crime Scene) Later, while with Tracy, Steve noticed Hurley talking to Sawyer, but refusing to look at him. (Vacation)

At the cockpit, that night, Steve decided to go with Locke, because he didn't trust Jack and he hated the beach. (Choose Your Battles) Two days later, at Tracy's request, Steve set off for the Staff Station with Richard. The next morning, when Verena, Craig, and Lance arrived at the Staff Station, Steve and Richard were already there. They handed four guns over to Steve and Richard and parted ways again. (Hardest Decision) Two days later, Tracy arrived at Steve's house and she asked him to go after Sophia, who had run off into the jungle. After finding Sophia, Steve met Andrew. (The Kahana) He questioned Andrew, at gunpoint, and finally realized that Andrew was one of the Others. As he talked to Andrew, Steve accused him of killing his best friend. After Sophia mentioned Andrew's death, Steve got confused, but Andrew explained that his death had been faked. After parting with Andrew, Steve and Sophia went back to the Barracks where their friends were being attacked by mercenaries from the freighter. Steve took refuge in Faith's house with Richard and Faith. Soon after, Howard arrived, but he left after Steve told him that Sophia was by Claire's house. Moments later, he returned because they knew Sophia was dead. (Class Newsletter)

Late that night, Steve saw the monster attack the mercenaries. Shortly after midnight, Steve left the Barracks with Howard, Richard, and Faith. After finding the Arrow station, Steve decided to stay there to rest with Richard while Howard and Faith went on ahead. (Healing) Steve and Richard left the Arrow station that morning and arrived at the beach in the late afternoon. A couple days later, Steve went on the second trip on the zodiac raft, intending to get to the freighter. (Membata) On the raft, Steve thought that something was wrong with Craig, but Neil assured him that Craig would be fine once they got to the freighter, but they soon found out the freighter was gone. Just then, the sky lit up. (Ageless)

Shortly after the light cleared, Steve, along with the others on the raft, returned to the Island to find their camp missing. After another flash, Verena approached Steve and retrieved the guns from him that she had given him about a week before. After two more flashes, Steve escaped into the jungle during the flaming arrow attack with Sally, Robert, Bob, and Jake. (Just Survive)

One day, three years after the flashes ended, Steve, along with Sally, Robert, Jake, and Bob, were found by DHARMA shooters. Fortunately, they were saved by Janelle, Simon, Chris, and Morris. Some time later, they found Howard, Ryder, and several others by the Swan Station construction site. Just then, Micah arrived with some shooters. As a fight ensued, Steve ran off with Ariel, Sally, Morris, and Janelle. They arrived at the edge of the construction site just in time to see Jack drop the bomb down the shaft. (Tuck Everlasting)

Retrieved from "https://lostpedia.fandom.com/wiki/User:Crash815/Steve?oldid=865662"
Community content is available under CC BY-NC-ND unless otherwise noted.