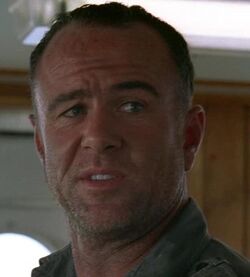 Nathan Hendricks is one of the Kahana crew memers. His character was briefly seen in the Season 4 episode, There's No Place Like Home, Part 1, but is more prominent in the story entitled Lost 4Ever, created by Lostpedia user Crash815.

In May of 1972, Nathan was lead into a hospital by his father and shown his newborn baby sister, Sonya. (Brotherly Love)

When Nathan was ten-years-old, his father was his soccer coach. After practice was over, one day, his father kept him afterwards, to help him train, because he wanted Nathan to be a professional soccer player. About a year later, Nathan was visiting his uncle in Los Angeles. While on his uncle's boat, his uncle let him steer the boat. In doing so, Nathan felt empowered, instilling in him a love a boating. His uncle noticed this and offered to teach him to drive a boat when he was older. (Game Over)

One day, a few years later, Nathan was eating dinner with his family, when his father mentioned that Nathan's uncle had called, offering to team him to drive a boat. Sensing an argument was coming, Nathan's mother asked him to leave the room. From the other room, Nathan could hear them arguing about the situation. His mother defended him and told his father that he didn't enjoy soccer anymore because of him. (Game Over)

Years later, when Sonya was sixteen-year-old, Nathan arrived at her school to pick her up and saw her with a black eye. After finding out from her who the attacker was, Nathan threatened him, in an attempt to prevent future incidents. (Brotherly Love)

A few years later, in early 1994, Nathan's dad visited him and berated him for choosing boat pilot as a career. Nathan got upset with his father and told him that he couldn't keep living through him. Nathan explained that he didn't want to be a professional soccer player and his dad would have to accept that. Upset, his dad left in anger. (Game Over)

In late 1995, Nathan went to an indoor climbing complex with Sonya. As she climbed up the wall, Nathan noticed that the rope was beginning to tear, so he told her to stop and to hang on. Hurrying to help her, as the rope tore, Nathan enlisted the help of Tyson, a bystander, to anchor him. Quickly, Nathan climbed the wall and grabbed Sonya's hand, as she was about to fall, but because her hand was so sweaty, she slipped out his grasp and she broke her leg, falling to the ground. Later, at the hospital, Nathan met Tyson again and he tried to give Nathan some comforting words, but his tone gave no comfort. (The Climb)

In early 1996, Nathan was at the swimming pool with Sonya when she slipped into the pool and wrecked her ankle. Fortunately, she was saved by Andrew. (Ageless) Months later, Sonya asked Nathan to talk to Sam, one of the men who had helped her after he accident at the pool. While talking to Sam, Nathan found out that Sam would do whatever it took to be with Sonya for the rest of his life. (Brotherly Love)

In June of 2003, Nathan was in Los Angeles, visiting his uncle. One night, he went to a club and met Jenna O'Malley. She told him of her boyfriend problems and he told her to call him if she was ever able to deal with them. (The Climb)

About a year later, Nathan got a call from Jenna after she had broken up with her boyfriend. At the time, Nathan was planning on visiting his uncle in Fort Collins. Months later, after secretly dating Jenna, he asked her to choose between him and her other boyfriend and moved to Australia. She accepted and moved in with him soon after. (You've Got Mail)

When Jenna's ex-boyfriend came to Australia to try to win her back, Nathan was the one who answered the door. (Let It Go) The day before the crash, Sonya visited Nathan and told him that she was pregnant with Sam's child. (Don't Tell)

The night after Flight 815 crashed, Nathan was with Jenna when they found out about the crash. (Think About It) About two weeks later, Nathan tried to comfort Sam about the crash, and Sonya's apparent death. (Love You Madly) Three days later, Nathan invited Sam to have dinner with his family. The next day, Sam accepted Nathan's invitation and had dinner with Nathan, Jenna, and Nathan's parents. (How You Feel) A few days later, after weeks of supressing her emotions, Jenna opened up to Nathan about the crash. About three weeks later, Nathan told Jenna that he believed that Sonya, Craig, and Larry could be alive. (Coming to Terms) About a week later, after seeing Sam on television, Nathan called him and told him that Sonya had been pregnant before the crash. (Don't Tell) About after that, Nathan visited Sam's apartment and found out that Sam had left for Jakarta. (The Future)

Some time later, Nathan was with Jenna when they heard about the fake Flight 815 wreckage being found. (The Kahana) After finding out about the Kahana, Sam requested that Nathan join its crew as the pilot. (The Question) Nathan agreed and proceeded to call Charles Widmore for a job on the freighter. (The Call) The next day, Nathan left Australia to join the crew of the Kahana in Fiji. (Think About It) He visited Sam briefly before leaving. (The Question) Upon boarding the freighter, Nathan met Faraday, Frank, and Keamy. (Don't Tell)

The night after the survivors' call to the boat, Nathan watched the science team leave on the helicopter. (The Call) The next day, Nathan saw Michael leaving the radio room, supposedly looking for Minkowski. (The Climb) Later that day, after Brandon and Minkowski returned on the Zodiac raft, Nathan helped Minkowski to the sick bay. (Hostage Situation) He later helped launch Faraday's payload from the boat. Two days later, Nathan was on the deck of the Kahana looking at the ocean when he heard the alarm go off. (Hardest Decision) The next day, Nathan found Sayid and Desmond in the communications room and lead them back to the sick bay. On their way there, Nathan asked Sayid and Desmond if Craig was alive. (The Kahana) He then asked if Sonya was alive. (How You Feel)

Later that day, Nathan watched the mercenaries leave on the helicopter. (The Climb) The next day, Nathan saw Sayid and Desmond approaching Kevin Johnson on the deck of the boat. (Class Newsletter) Four days later, Nathan was at the edge of the deck when Keamy killed Ray and Gault. (Membata) The next day, after Michael repaired the boat's engines, Nathan refused to move closer to the Island if he could not see the reef. (The Climb) Some time later, Nathan found Oscar sitting on the deck and asked him if he was okay. They talked about the events from the night before, including Gault's death. (A Second Chance) After they wandered into the bridge of the Kahana, Nathan met Lisa and Faith. (The Future) During the chaos after the helicopter returned to the boat, Nathan told one of the survivors to grab a life jacket because they couldn't all fit on the chopper. (Membata) After the freighter exploded, Nathan swam to a piece of wreckage where Lisa and Faith were sitting by someone's body. While trying to climb onto the piece of wreckage, Nathan slipped and fell on a piece of metal, killing himself. (The Future)

Exactly three years after Nathan left Australia, Jenna called Sam and asked if he'd heard from Nathan at all. Sam replied that he hadn't and that he still believed the Oceanic 6 were lying. (The Future) That same day, Jenna talked to Dexter, who told her the truth about Flight 815. She asked Dexter if Nathan was alive, but Dexter had never heard of Nathan. (The Prestige)

Retrieved from "https://lostpedia.fandom.com/wiki/User:Crash815/Nathan?oldid=867069"
Community content is available under CC BY-NC-ND unless otherwise noted.