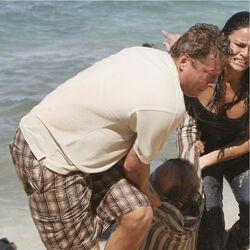 Dieter is one of the background tail section survivors of Oceanic Flight 815 and one of the background DHARMA Initiative members. His character is not featured on the show or any novel, but is depicted solely in the story entitled Lost 4Ever, created by Lostpedia user Crash815. He was mentioned briefly in The Other 48 Days by Nathan. He was referred to as "the German who was helping us with the injured". Before the crash, Dieter worked for the Chenchey Institute with Savo. Dieter, realizing the inhumane actions of his coworkers, fled on the doomed Oceanic Flight 815. He survived the crash and was taken by the others the first night after the crash. He survived until the time flashes, where he united himself with other crash survivors and later joined the DHARMA Initiative. After betraying his friends and joining the Phoenix Project, Dieter tried to redeem himself by trying to free Andrew, which eventually ended up getting him killed.

In the flash-sideways world, Dieter rescued Verena and Lance from Savo's men.

Dieter was on the train during the Eschede train disaster. During the aftermath of the wreck, Andrew helped him. He was then airlifted to a hospital with twenty-six others. He was sad to find out that his wife had died in the wreck. (Ageless)

Two months after his wife's death, Dieter got a job with the Chenchey Institute of Research, trying to move on with this life. About a year later, Dieter talked to Joanne Gellhorn. Both of them knew that Savo's experiments were inhumane and Joanne knew she was probably going to die soon. Because she knew this, Joanne gave him a letter to deliver to her sister after she died. About four months later, Dieter delivered the letter. (The Kite Runner)

About five years later, Dieter visited his friend, Rico Sanchez, in Australia and gave him information about Zoran Savo. As Dieter left Rico's shop, Elliot arrived. Two days later, one of his coworkers arrived with someone's laptop that had information about their research. Savo sent Dieter to find the owner of the laptop and kill them. Instead, Dieter threw the laptop away, headed for the airport, and got a seat on Flight 815. On the plane, Dieter woke up from the turbulence, just before the tail broke off and fell into the water. (The Kite Runner)

Dieter landed in the water and swam to the shore, where Ana Lucia got him to help her with Donald. That night, he was captured by the Others. He woke up the next day at the Hydra Station, where Marc told him that if he cooperated he would have a place to live. (The Kite Runner) A week after being captured by the Others, Dieter was granted the opportunity to join the Others' community at the Barracks. (We're the Good Guys) Two days later, Dieter saw Ben, Bea, and Tom leaving the Barracks. He asked Ryder where they were going. Ryder told him that they were getting sedative from the Staff Station. Dieter worried about what they were doing, but was comforted by Ariel. (Tales from the Tail)

Almost two weeks later, after the next group of tail survivors joined the Others, Dieter began sharing a house with Eli. (The Key) Two days later, Dieter went to the Pearl Station with Eli and they found Howard inside. (The Dreamer) Later, after Claire escaped from the Others, Dieter helped clean up the Staff Station. (Tales from the Tail)

Months later, after Locke joined the Others' camp, Andrew told Dieter to round up people and meet him in the jungle. Not long after going into the jungle, the sky lit up. (Ageless)

Dieter continued to travel with Andrew after the sky cleared. (Ageless) After three more flashes of light, Andrew enlisted Dieter to help him after hearing an explosion. They went to the creek where they saved Craig and Chris from being found by the Hostiles. Once the Hostiles were gone, Dieter left the creek with Craig and Chris. (Faulty Memory) After three more flashes, Dieter continued traveling through the jungle with Chris and Craig. They eventually found themselves at the survivors' beach. (Family Matters) The next morning, Dieter saw Ariel collapse in the sand. (Twenty-Six Years)

Later, after being chased off the beach by some DHARMA gunmen, Dieter found himself with Elliot and Craig. Then they started toward the lagoon. Soon after, however, they encountered Dawn, Verena, Chris, and Jim, who narrowly avoided getting hurt by the monster. During a series of flashes, Dieter made his way to the lagoon where they found Andrew, Dexter, and Marc. When Andrew needed someone to deliver a needle with his blood to Ariel, Dieter offered to go with Chris and Elliot. (Conditional) Soon after, they found Ariel, Eli, Ryder, and Oscar and pointed them in the direction of the lagoon. After two more flashes of light, Dieter, upset with Elliot's stubborn attitude, injected Ariel with Andrew's blood, saving her life. (The Dreamer)

Soon after the final flash, Dieter ran out of the jungle with Chris, Ariel, and Elliot to find Eli and Ryder by the cliff. They discovered that the time flashes were over. Dieter asked where Jim, Andrew, Dawn and the rest were. Ryder explained that they had escaped the Island. That night, Dieter was able to sleep while Elliot and Oscar kept watch. (The Dreamer) A week later, Dieter suggested that the group find out where their people were. However, soon after, Eli was shot by a DHARMA gunman, scaring the rest of the group into the jungle. Dieter ran off with Oscar and Elliot. Later that day, they found Lance, Nancy, and Zander at a beach across from the Hydra Island. (Tales from the Tail) A couple days later, while sitting around a campfire at their beach, Dieter and his group heard some people nearby. He ran away from the campfire with Zander and Elliot. (The Angel) About a week later, Ariel found Dieter, Elliot, and Zander in the jungle and brought them back to the Barracks to join DHARMA. (That's a Maybe) About two years later, while recording a video for their friends in the future, Dieter expressed uncertainty if they would ever see them again. (Time Capsule)

One day, about three years later, Dieter saw Jin arriving at the infirmary to talk to Sawyer. Soon after, he saw Juliet exit and smile at Sawyer. (Heroes) The next day, he went with Lance, Nancy, and Jeff to greet the new recruits. Near the processing center, he saw Sawyer arrive in a van with Jack, Kate, and Hurley. (Brothers in Arms) The next day, Dieter saw young Ben getting into a DHARMA van. He advised Ben to go home before long. (Burning Heart)

The next day, Dieter was returning to the Barracks as Zander and Howard headed for the sonic fence. They explained their situation to him just before Tyson and Eli showed up. To prove that he wasn't allied with Zander and Howard, Tyson told Dieter to shoot Howard. As Dieter prepared to shoot Howard, Eli tackled him. After getting away from Eli, Dieter shot him and prepared to shoot Howard. Before he could shoot Howard, Zander shot Dieter. (Some Starless Night) The next morning, he was taken to the Barracks by Tyson. (The Day After Tomorrow) Later that day, he was stitched up by Rosie. After waking up, he told Tyson that Howard, Ariel, Chris, and Ryder were working with Zander, Eli, and the rest. After that, Dieter was offered a position in the Phoenix Project by Micah. Throughout the following hours, Tyson proceeded to take Dieter through orientation at the Phoenix Project, showing him Jeff's cell, the storage room, and, finally, the cell with the Hostile prisoner: Andrew. (The Kite Runner)

Dieter expressed his astonishment to Tyson that they were holding a teenage boy prisoner, but was soon calmed down and forced to inject Andrew with malaria. Andrew healed instantly from the malaria and Dieter was taken out of the cell. Later that day, Dieter returned to Andrew's cell with Vernon, intending to inject Andrew with small pox. While "preparing the needle" Dieter told Andrew not to give up hope, because Richard would rescue him eventually. Instead of injecting Andrew, Dieter tranquilized Vernon and proceeded to release Andrew and Jeff from their cells. Before they left, Dieter told Andrew to remember him when he went to Germany. Waiting at the Barracks, expecting to need to stall for Jeff and Andrew, Dieter saw Roger shoot Sayid. Soon after Hurley's rescue of Jack and Sayid, Tyson found him. Not long after, Vernon showed up and told Tyson about Dieter tranquilizing him. He was taken into Andrew's cell at the Phoenix Project and, some time later, and, after Andrew was recaptured, Dieter was shot by Tyson. (Tuck Everlasting)

Years after Dieter's death, Andrew visited Germany and was on the same train as Dieter when it derailed. During the aftermath, Andrew found Dieter and recognized him from the Phoenix Project. Years after that, after Andrew returned to the Island in 2008, Andrew told Jessica that Dieter died in 1977. (Tuck Everlasting)

Retrieved from "https://lostpedia.fandom.com/wiki/User:Crash815/Dieter?oldid=1028359"
Community content is available under CC BY-NC-ND unless otherwise noted.