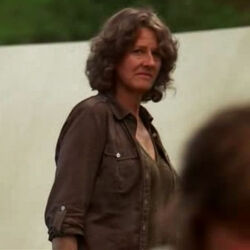 Ariel Williams is one of the background Others and one of the background DHARMA Initiative members. Her character is not featured on the show or any novel, but is depicted solely in the story entitled Lost 4Ever, created by Lostpedia user Crash815. Ariel was Dawn's mother and Derek's wife, before her plane (Oceanic Flight 164) crashed near the Island. After arriving on the Island, Ariel became one of the Others, where she stayed for twenty-six years. During the time flashes, Ariel realized that Dawn (who had been taken from the Flight 815 tail survivors) was her daughter. After the time flashes ended, Ariel joined the DHARMA Initiative and developed a good relationship with her son-in-law, Ryder. After returning to 2008, Ariel was reunited with her husband, Derek, shortly before his death. She later left the Island on the Ajira plane, but returned on Frank's plane after Dawn and Robert (her grandson) were kidnapped by Mittelwerk. While still on Hydra Island, Ariel was captured by Mittelwerk's men.

In the flash-sideways world, Ariel was Dawn's widowed mother, after Derek's death, due to his cancer. She assisted Jeff Hadley when he and his pregnant wife needed somewhere to stay in New York. She later flew out to Los Angeles to visit Dawn. At an unknown point in time, Ariel regained her memories of the Island. She later moved on with her husband and her friends.

On December 11, 1974, Ariel gave birth to her daughter, Dawn Williams. About three years later, she went to see the doctor with her husband, who found out he had cancer. (Never Gets Easier)

About a year later, she took a trip to Singapore. (Second Crash) A week later, she boarded her plane home. Shortly before taking off, she met Reuben Hadley. Hours later, the plane crashed in the ocean and got out of the wreckage along with Reuben and several others. Along with other survivors of her plane crash, Ariel floated in the ocean for over a day before arriving on the Island. (Twenty-Six Years)

Two days after arriving on the Island, she asked whether Sean, one of her fellow survivors, was going to survive. Ten days later, Ariel watched in horror as Todd and Reuben returned to the beach with Julia's body, which had a bullet wound. About a month later, Ariel promised Reuben that she would deliver a message to his son if he didn’t get rescued. More than fifty days later, Ariel held the infant Jessica as Susan and Todd asked Patrick to perform a wedding for them. Four days later, Ariel and the other survivors were captured by the Hostiles and given the chance to join them. (Twenty-Six Years)

Sixteen years later, Ariel asked Ben if she could leave the Island to return to her family, but Ben told her that she couldn’t or her husband’s cancer could return. (Twenty-Six Years)

Two days after Flight 815 crashed on the Island, Alpert asked Ariel to make a file about Andrew. She went to the Flame to begin working on it. (Twenty-Six Years) A week later, Ariel comforted Dieter after he saw Bea, Ben, and Tom leave the Barracks to get some sedative from the Staff Station. She then introduced herself to him. (Tales from the Tail) About a week later, Ariel met Zander after he joined the Others and she realized he was Julia's son. The next day, Ariel worked on Andrew’s file at the Flame. (Twenty-Six Years) Almost two weeks later, Ariel helped clean up the Staff Station after Claire's escape. (Tales from the Tail)

After moving to the Decoy Camp, Ariel assured Austin that the move was only temporary. (The Key) Weeks later, Ariel, along with the rest of the Others, headed towards the Temple without Ben and Alex. (The Future) More than a week later, shortly after Locke joined the Others, Andrew took Ariel away from the Others' camp because he sensed something would happen. Soon after, the sky lit up. (Ageless)

Ariel walked through the jungle with a small group of her people. (Ageless) Soon after, Ariel discovered that Marc had a nosebleed. (Twenty-Six Years) Ariel talked to Andrew about if they would be okay. Andrew replied that Eli may feel some side effects, because the chemical they had used to stop his twin-dreams would stop working. Andrew then went on to explain twin-dreams to Ariel. (The Dreamer) While taking a rest from walking, Ariel found out that Dawn was her daughter. (Ageless) After another flash of light, Marc told Ariel that the nosebleed was getting worse. Then he told her that she had a nosebleed too. (Twenty-Six Years) After another flash of light, Ariel was with her group when they found the Flame Station while wandering through the jungle. (Just Survive) After another flash of light, Ariel witnessed Marc's anxiety when he regain his lost memories. Soon after, Ariel heard some people talking in Latin. She told Marc about it and they ordered the group to scatter. Nancy tripped while running away and Ariel stopped to help her. Because she stopped, she was captured by the Hostiles. (Faulty Memory) She was soon able to escape their clutches right before another time flash. Right after the light cleared, Ariel and Marc passed out. (Twenty-Six Years)

After another flash of light, Janelle and Dexter found Nancy with Ariel and Marc unconscious near the Pearl Station. Ariel began to wake up, after another time flash. (Reading Lips) After Ryder found her, he took Ariel, Oscar, and Elliot off to find Dawn. Just before leaving, Ariel gave Andrew a folder. (Family Matters) On the way to the beach, Ariel told Ryder what happened to her after her plane crashed. After arriving at the beach and reuniting with Dawn, Ariel passed out. (Twenty-Six Years) When a group of DHARMA gunmen arrived at the beach, Eli and Ryder began to carry Ariel into the jungle. In the jungle, Ariel began talking incoherently asking for Dawn. (Conditional) After a few more time flashes, Ariel said that they were close to the lagoon. After they were found by Elliot, Dieter, and Chris, Ryder left to help Dawn. After two more time flashes, Ariel stopped breathing, but she was saved from death when Dieter injected her with some of Andrew's blood. (The Dreamer)

Shortly after the time flashes ended, Ariel found Ryder and Eli by the lagoon. Soon after, Ariel discovered that Oscar had saved Dawn from death. A week later, Eli awoke from a twin-dream. Ariel saw him awake so suddenly and asked what was wrong. Eli lied and said he was just tired still. (The Dreamer) Later that day, because they had been separated from their people, Ariel voted in favor of looking for their friends. Soon after, Eli got shot and Ariel ran away to avoid being hurt. (Tales from the Tail) Days later, while near the Barracks, Ariel, Howard, Chris, and Ryder encountered four DHARMA employees. In self defense, they killed the DHARMA employees and later took on their identities. (Wonderwall) With DHARMA, Ariel worked as a gemologist. (Photograph)

Four days later, after Jeff, Larry, Janelle, and Eli joined DHARMA, Ariel talked to Jeff about her crash, since his cover-story for their appearance was similar to Ariel's crash. Ariel used this opportunity to give Jeff a message that his father had given her years ago. (The Angel) Four days after that, Ariel talked with her fellow time travelers about finding the rest of their people. The next day, Ariel found Elliot, Dieter, and Zander and brought them to the Barracks. (That's a Maybe)

About a year later, Ariel talked to Ryder about being separated from Dawn. She explained to Ryder that she didn't know how she survived twenty-seven years without her husband, but it was worth it to eventually meet her daughter for a little bit. (Heroes) About a year later, while recording a video for their friends in the future, Ryder guessed that his child would be a boy. Ariel interrupted and insisted that her grandchild would be a girl. (Time Capsule)

About a year later, Ariel saw Sawyer leaving the Barracks early in the morning. She asked him what was going on, to find that Jack, Kate, and Hurley were back. After hearing that news, she ran to Ryder's house and told him, suggesting that maybe Dawn was back too. (The Angel) That night, Ariel ran to the wreckage of the burning van with Nancy to help. (Burning Heart) The next day, Ariel went to the motor pool to talk to Ryder. From Ryder, she found out that Dawn had given birth to a boy. (Some Starless Night)

The next morning, he was woken up by the sound of Ryder calling her on the walkie. He told her to round up their people and get out of the Barracks before Tyson found them. Ariel immediately got out of bed and went over to Chris' home and got him to help her. Later that day, Ariel met with Janelle, Oscar, and Elliot at Elliot's house. She left the Barracks with Oscar and Elliot, while Janelle went to find Chris. Some time after getting to the other side of the sonic fence, Ariel, Elliot, and Oscar found the Hostiles' camp and saw Alpert shoot Faraday. Just then, Marc found them and demanded to know who they were. (The Day After Tomorrow) After shouting at them again, Ariel, Oscar, and Elliot were saved by Austin and Josh, who had been hiding in the jungle for three years. As Austin and Josh talked to them, Oscar saw some more shooters arriving. (The Kite Runner) The group tried to hide behind some bushes, but they were soon found by the shooters. However, not long after, they were saved by Ryder, Howard, Zander, Susan, and Peter. Unfortunately, Josh was killed in the fight and Susan was shot. Sometime later, they found the Swan Station construction site where Radzinsky and Dr. Chang were arguing. Soon after, Chris, Janelle, Simon, Morris, Steve, Sally, Jake, Robert, and Bob found them. Just then, Micah arrived with a group of gunmen. While Micah's men were distracted, Ariel ran off with Janelle, Sally, Morris, and Steve. It wasn't long after that they arrived at the edge of the Swan construction site. They arrived at the site just in time to see Jack drop the bomb down the shaft. Soon after, their guns were pulled from their bodies by an electromagnetic force and a white light appeared from the shaft. (Tuck Everlasting)

Shortly after ending up in 2008, after the flash, Ariel made sure that Simon was okay. He replied that he was just disoriented. Some time later, Ariel, Simon, Janelle, Sally, and Steve headed out toward the Barracks to find safety. On their way there, they encountered Dawn and Dexter. Dawn and Ariel shared a hug, celebrating their reunion. At that point, Dawn and Dexter explained that they were going to Hydra Island to warn the Ajira Survivors of what was going on. Steve decided to go with them. Ariel told Dawn that she would find Ryder for her. Dawn told her mom about Derek being on the Island and Ariel promised to find Derek and Ryder. (We're Back)

In the new timeline, Ariel did not crash on the Island. After Flight 815 landed in Los Angeles, Dawn called her and told her that she'd found Ryder. Ariel told Dawn how happy she was for her and that she wished Derek had been alive still to share their joy. (We're Back)

Retrieved from "https://lostpedia.fandom.com/wiki/User:Crash815/Ariel?oldid=1028270"
Community content is available under CC BY-NC-ND unless otherwise noted.