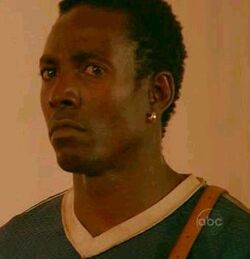 Later on the island, after being rescued from the destroyed Swan Station, Eko was taken back to the beach camp. While in his tent, he had a dream showing moments from his past, including Ulu shooting with the military. ("The Cost of Living")

Retrieved from "https://lostpedia.fandom.com/wiki/Ulu?oldid=1116168"
Community content is available under CC BY-NC-ND unless otherwise noted.