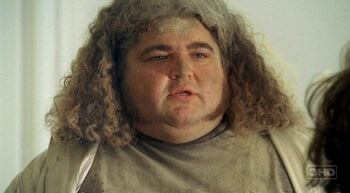 "Tricia Tanaka Is Dead" is the tenth episode of Season 3 and the fifty-ninth produced hour of the series as a whole. It was originally broadcast on February 28, 2007. When Hurley discovers an abandoned van in the jungle, he makes it his mission to get it going again. Meanwhile, Kate and Sawyer return to camp and decide what to do about Jack who is still with the Others.

Around 1987, a young, skinny Hurley carries tools to a Camaro that is up on blocks and opens the hood. ♪ His father gives him a Glacier Bar against his mother's wishes, and tells him to start the car even though it needs a new carburetor. Hurley claims it's stupid, but his father tells him hope is never stupid and you have to make your own luck. He then informs Hurley that their planned trip to the Grand Canyon will have to wait until he comes back from some work he has to do in Las Vegas, and drives off on his motorcycle. ♪♪

Seventeen years later, reporter Tricia Tanaka is filming a fluff piece in Diamond Bar, on how Hurley bought a controlling interest in Mr. Cluck's Chicken Shack, where he used to work. She tries to interview Hurley, but he starts to relate all of the bad luck he has had: his grandfather's heart attack, the burning down of the house he bought his mother, his best friend Johnny running off with his girlfriend Starla, and the suicidal jumper at his accountant's building. Tricia complains about his attitude and goes inside the Shack with her camera man while Randy assures Hugo that everything is safe. Suddenly a meteorite falls from the sky, completely destroying the Shack and killing Tricia and her camera man.

Later that day, Hurley is greeted at his mansion by his mother. ♪ He tells her what happened and renews his intentions to go to Australia to investigate the Numbers. His mother says he can't be cursed because his father has returned after seventeen years. His father jokes that "your mother wasn't kidding about those candy bars."

At dinner, David remarks on a golden statue of Jesus, and Carmen explains that Hurley commissioned artisans in Taxco to make it. ♪ She also explains that they hired workers from Bennigans to be their butlers. Hugo gets upset that his mother isn't suspicious of his father suddenly showing up after he won the lottery, but she claims he came because she called him to ask for help with Hugo's obsession with his "curse." Hugo gives Mr. and Mrs. Tron severance and threatens to get rid of the money, all that it has bought, and his father. His mother covers the ears of the Jesus statue and says she has become intimate with Hurley's father again. She tells Hurley to show his father the Camaro which he has saved all these years.

Hurley's dad wakes him after some initial trouble due to Hurley wearing earphones to drown out his parents' lovemaking noises. He asks him to go with him to break the curse. They end up visiting a psychic, Lynn Karnoff, who tells Hurley his fortune using tarot cards. The first card tells her he has won money. The second, the Six of Swords, tells her it has brought him misfortune. She claims to see the Numbers and lists them. She says they are cursed and pulls a third card, Death. She says his curse can be removed and asks him to take off his clothes while she starts preparing ingredients to exorcise his curse. He offers her first a thousand, and then ten thousand dollars to admit that his dad put her up to it. She acts offended, but then relents and admits it after being offered ten thousand dollars. Hurley storms out.

Later Hurley is packing to go to Australia. His father admits that he came because of Hurley's money, but says Hurley doesn't need to leave, he just needs a little hope. He should make his own luck, give away all the money except enough to fix the Camaro with his dad and take the trip to the Grand Canyon together they had planned. Hurley pauses to consider, but leaves. His father says he'll be there when Hurley gets back. ♪

Hurley confesses his fears and troubles at Libby's grave, and lays down a flower. ♪♪ He finds Charlie shaving and gets him to reveal Desmond's flashes of Charlie being fated to die. Hurley says it might be his fault because of his curse. Vincent emerges from the jungle with a skeleton arm holding a key. Hurley chases him through the jungle until the dog drops the arm. ♪ Hurley takes the key which has a lucky rabbit's foot key chain attached and follows Vincent to an overturned van. ♪

At the camp, Sun tells Jin that in order to help him learn, she will only speak to him in English from now on. Hurley bursts into the group and tells everyone about the van. He tries to get help in starting it, but only Jin volunteers, not knowing what Hurley was saying. ♪

In the jungle, Kate and Sawyer get closer to camp. Sawyer steps on a dart from the Swan dart board and Kate pulls it out. They talk for awhile, and Kate wants to reconcile, but Sawyer brushes her off. They reach camp and are enthusiastically greeted by the other survivors. Sawyer and Kate give each other longing glances, but each misses the other's look. ♪♪

Back at the van, Hurley and Jin find the owner of the arm, the skeletal remains of a man in a work suit which has on it a Swan DHARMA logo patch, the name "Roger," and the designation "Workman." They open the back door and find a mound of DHARMA beer. They pull out the skeleton, accidentally causing the head to come off and land on a pile of documents.

At the camp, Charlie demands that Desmond tell him when he will die, but Desmond informs him it doesn't work like that. Sawyer barges up to them and demands to know where his stash went. Desmond apologizes for drinking the Scotch, but reveals that Charlie and Hurley helped. Sawyer finds Hurley and Jin attempting to upright the van. Hurley is overjoyed to see Sawyer and both he and Jin give him a big hug. Hurley says that the car and Sawyer's return are signs that their luck is changing. Sawyer asks for his stuff, but Hurley bribes him with beer to get him to help fix the van.

On the beach, Kate tells Sayid about her experiences with the Others. She explains that Jack had instructed them not to come back for him, but that she is adamant that she should attempt a rescue. Kate then walks off saying that she is going to get help, without looking back.

Hurley, Sawyer and Jin push the van upright and look inside. There are a lot of documents, including a DHARMA blueprint for a dirt road winding down the side of an incline and ending at the Swan station. Sawyer freaks out at Roger's head and exits with some beer. Hurley closes his eyes, puts the key in the ignition, and tries to start the van but the engine doesn't turn over. He takes offense at Sawyer calling Roger "Skeletor" and his lack of enthusiasm about fixing the van, saying they need to do it as a symbol of hope.

While knocking back some of the DHARMA beers, Sawyer teaches Jin some English words. He asks Hurley what he's doing and Hurley says he's praying for hope. Sawyer throws a beer can at him, saying "here's your hope." Hurley sees the can rolling down a hill and gets an idea. He finds Charlie on the beach and snaps him out of his funk. He convinces him to help him with the van, saying it will give both of them the hope they need to change their fates.

Hurley returns with Charlie and gets the other three to push the van to where the hill starts. He gets out and they all look down to see a steep incline with some big black rocks at the bottom. Hurley says that if they push the van down the hill he can pop the clutch and get it started.

Charlie calls shotgun. Jin and Sawyer push them over the precipice and the van hurtles down the hill. Just before they are about to crash into the rocks, Hurley has his eyes closed and is telling himself he is making his own luck. He pops the clutch and the van starts. He swerves to avoid the rocks, and drives into a field. The van comes alive with the same song Hurley's radio was playing when his Dad left him. ♪ Jin and Sawyer join them for a joy ride, shouting as they circle the field. Hurley stays behind to go for another joy ride while the other three go back to camp with renewed hope. Jin gives Sun a flower, and a smiling Charlie joins Claire. Sawyer brings the beer back to his tent and looks for Kate, but she is long gone. He looks around at the happy couples with envy as he drinks his beer. ♪

While Kate is in the jungle at night, she sees that Locke and Sayid have followed her. They ask her why she didn't ask for help in looking for Jack. She says they weren't motivated, but Locke counters that they just didn't know where to look. Sayid sarcastically claims Locke has gotten a clue from Eko's stick. Gunshots fire, but Kate tells them to lower their weapons, and Danielle comes out. Kate asks for her help, and tells her that she was able to escape from the Others with the help of a girl, about 16 years old, who she thinks is Danielle's daughter, Alex.

The episode's opening song is "Shambala" by Three Dog Night. It returns at the end of the episode, and it lends its theme to an orchestral variation, also called "Shambala", which appears on the season's soundtrack, Three other cues appear on that album as well. The Lone Hugo" includes Hurley's second and third themes. "Fetch Your Arm" features his first. "Ain't Talkin' 'Bout Nothin'" is a variation of Kate and Sawyer's theme.

Retrieved from "https://lostpedia.fandom.com/wiki/Tricia_Tanaka_Is_Dead?oldid=1114745"
Community content is available under CC BY-NC-ND unless otherwise noted.