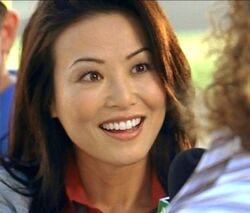 Tricia Tanaka was a newswoman from Action 8 News. She reported on Hurley's winning of the lottery, and his subsequent reopening of Mr. Cluck's Chicken Shack.

Tanaka interviewed Hurley in front of Mr. Cluck's, but quickly cut the interview short after Hurley started talking about his bad luck. After Tanaka and her cameraman went inside Mr. Cluck's to shoot additional footage, a meteorite crashed into and destroyed Mr. Cluck’s, killing Tricia Tanaka and the cameraman.

Retrieved from "https://lostpedia.fandom.com/wiki/Tricia_Tanaka?oldid=1098453"
Community content is available under CC BY-NC-ND unless otherwise noted.