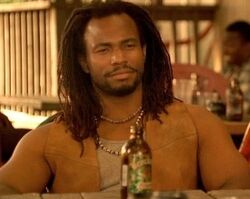 A trader appeared in one of Eko's flashbacks in "The Cost of Living".

When Emeka and his men told Mr. Eko of their deal with Yemi regarding the village's shipment of vaccinations, Eko met with a black market trader at a bar in an attempt to sell the vaccines. Emeka tried to murder Eko for his deal with the trader, but Eko ended up killing him instead.

Retrieved from "https://lostpedia.fandom.com/wiki/Trader?oldid=1096120"
Community content is available under CC BY-NC-ND unless otherwise noted.