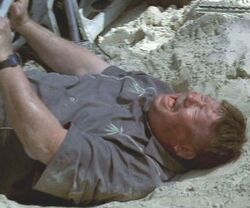 The "tourniquet man" was an Oceanic 815 survivor who was trapped under a piece of plane wreckage shortly after the crash. Jack, hearing his cry for help, noticed his legs were crushed under a piece of landing gear and enlisted Locke and other survivors to help pull him out. ("Pilot, Part 1") ("Walkabout")

After saving the man, Jack applied a tourniquet to his leg to stop the bleeding, which he removed later that evening. The following day, Jack commented to Boone that he ("tourniquet man") should be fine. ("Pilot, Part 1")

If this man had not died prior to the beginning of time shifts, then he died in the flaming arrow attack in 1954, ("The Lie") since Rose and Bernard Nadler are presumed to be the only survivors of it who are not main characters. ("The Incident, Part 1")

Retrieved from "https://lostpedia.fandom.com/wiki/Tourniquet_man?oldid=1116144"
Community content is available under CC BY-NC-ND unless otherwise noted.