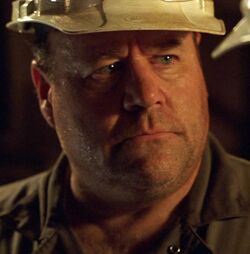 Tony was a construction foreman who worked for the DHARMA Initiative.

He called for Dr. Pierre Chang to come to the under-construction Orchid station where workers were having trouble drilling through the rock that protected the frozen wheel chamber. Once Chang arrived, Tony explained that while drilling through some of the rocks, one of the workers began grabbing his head, and suffered a nosebleed. Tony was instructed by Pierre not to drill or blast any further, as it may release an abundant source of energy, which if harnessed, would give the ability to manipulate time. ("Because You Left")

Retrieved from "https://lostpedia.fandom.com/wiki/Tony_(DHARMA_Initiative)?oldid=1106133"
Community content is available under CC BY-NC-ND unless otherwise noted.