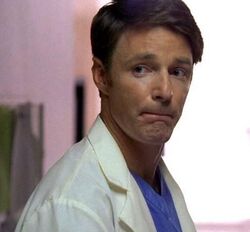 Tom Brennan was Kate's childhood sweetheart. He had a wife named Rachel, and a baby, Connor.

He was a doctor in St. Francis Hospital in Iowa, where he schedules a fake MRI for Kate's mother Diane Janssen so that Kate can see her one last time before she dies.

At some point in his youth, he accompanies Kate to a general store in town. He is in possession of his toy airplane that he received on his first flight by himself. Although intially apprehensive, he serves as lookout for Kate while she attempts to steal a lunchbox, but she is later caught. ("The Incident, Part 1")

When they were young, he and Kate buried a time capsule. Inside the time capsule are a number of childhood objects, including a red baseball hat and Tom’s favorite toy airplane. They also find a tape recording, which they play in the car. Recorded on August 15th (815) 1989, young Tom and Kate comment on how they will be married and have 9 kids when they find the capsule in the future, and also about running away together. Also on the recording, young Kate additionally mentions that Tom “knows why” she always wants to run. The tape is stopped, and in that moment the two kiss. Pulling away, Kate apologizes as Tom says they’d better get to the hospital.

Kate is reunited with her mother and apologizes for everything she has put her through. However, instead of a warm greeting, Dianne screams for someone to help her. Kate runs from the room, but is grabbed by a security guard, whom she dispatches by hitting with him with his own walkie. Tom finds her, and the two head for his car. The police, however, have already created a barricade to prevent her escaping. She shouts for Tom to get out of the car, but when he refuses, she drives straight through, clipping the police car and experiencing heavy fire from the sheriff. Though they manage to escape, it is not without cost, as Kate realized that one of the sheriff’s bullets has hit and killed Tom. With little time, Kate is forced to run from the car, leaving both Tom and the toy airplane behind. ("Born to Run")

Retrieved from "https://lostpedia.fandom.com/wiki/Tom_Brennan?oldid=619623"
Community content is available under CC BY-NC-ND unless otherwise noted.