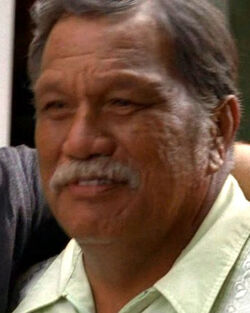 Tito Reyes was Hurley's grandfather. He worked 3 jobs in 52 years of his 70-year life. Hurley referred to him as "the greatest guy I know". Hurley's lottery winnings were going to allow Tito to retire.

He collapsed and died of a heart attack during Hurley's press conference after Hurley won the lottery. It was Tito's death that began a series of unfortunate events that first led Hurley to believe he was afflicted by a curse associated with his use of the Numbers to win the lottery.

Archie Ahuna was listed in the press release as playing Tito in "Everybody Loves Hugo", but he did not appear in the final episode. It is likely he appeared in a deleted flash-sideways sequence. Hurley's mother sets her son up on a date with one of Tito's neighbors, Rosalita.

Retrieved from "https://lostpedia.fandom.com/wiki/Tito_Reyes?oldid=1106418"
Community content is available under CC BY-NC-ND unless otherwise noted.