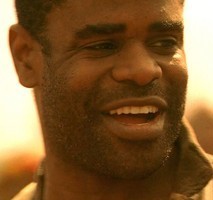 The Thug captain was the man who led the group of militant thugs that came into Eko's childhood village home to kidnap children to join their ranks. According to the Nigerian priest, they had taken many in the past. He put a gun in young Yemi's hands and tried to force him to shoot an old man, but Yemi couldn't do it. Eko then took the gun, and without hesitation, shot and killed the man. The thug captain, amusedly addressing the boy by the title of "Mr." Eko, laughed and called him a "born killer"; he ripped off the cross from around Eko's neck and told him that he wouldn't need it anymore. From that day forth, Eko was kidnapped and lived a life as a criminal warlord.

Retrieved from "https://lostpedia.fandom.com/wiki/Thug_captain?oldid=1095730"
Community content is available under CC BY-NC-ND unless otherwise noted.