For other uses of "Thomas" or "Tom", see Tom (disambiguation). 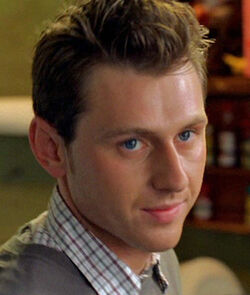 Thomas is Claire's ex-boyfriend and the biological father of Aaron. He lives in Australia and is an artist.

After the initial shock of Claire's pregnancy, Thomas became enthusiastic about having the child with her. However, he later left Claire several months into her pregnancy after an argument with her. He said that he had thought she was on the pill and insinuated that she got pregnant intentionally. ("Raised by Another")

Several paintings are visible in Thomas' apartment and studio in "Raised by Another". Fans have noted that the styles of the paintings are very similar to that of the mural in the Swan station, also known as the "Hatch painting" (see left).[1]

One of the paintings in the apartment from "Raised by Another" is later visible in the office of Charles Widmore in "Flashes Before Your Eyes" which seems to be painted by Thomas is seen in Charles's apartment in "The Shape of Things to Come". (see below for explanation)

LA X can be read on the bottom of the rightmost painting (see the screencap above).

Retrieved from "https://lostpedia.fandom.com/wiki/Thomas?oldid=1106419"
Community content is available under CC BY-NC-ND unless otherwise noted.