Start a Wiki
"This Place Is Death" 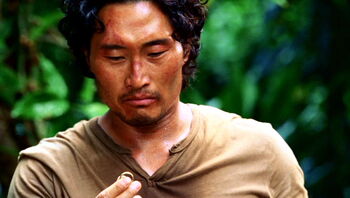 "This Place Is Death" is the fifth episode of Season 5 of Lost, and the ninety-first produced hour of the series as a whole. It was originally broadcast on February 11, 2009. After meeting the French science team, Jin reunites with the remaining Island survivors, who are experiencing trouble in coping with Charlotte's deteriorating health. Meanwhile, Sun holds Ben at gunpoint and stops his plans to return to the Island.

Jin, confused, asks Danielle her name and where she came from. Danielle responds that her group left Tahiti on 15 November 1988. Jin argues with the members of the science expedition about what to do next. ♪ He wants to return to the beach camp, while Robert and the others want to find the radio tower, which is the source of the transmission. The expedition members convince Jin to accompany them to the radio tower, as Jin does not know the way to his own camp from the current location. ♪

Danielle stops to rest as they trek into the jungle, and flirts with Robert about the gender and name of their baby. Robert offers her water, but does not have a canteen; they call to Nadine, who had been carrying their canteen, but she is missing. They look for her briefly, then Montand directs others to conduct searches. They hear a noise, which Jin identifies as the Monster. A few moments later, a tree is torn up and Nadine's dead body lands near them. Jin yells at the group to run as the smoke monster makes its way through the trees. The monster catches Montand and drags him through the jungle to a cerberus vent near some old ruins.

The group chases him and manages to grab his arm just before the monster can pull him down the hole. As they struggle with the monster, a tentacle of smoke wraps itself around Montand's shirt sleeve and arm, seperating the arm from Montand and the sleeve from the shirt. Horrified, the group discards the severed arm. They then hear Montand calling from the hole, saying that he has been wounded and needs help. The members of the science expedition decide to enter the hole, despite Jin's warning not to. Lacombe, Brennan, and Robert enter the hole, but Jin manages to convince Danielle to remain behind for the sake of her baby. As they wait, Jin experiences a time flash.

This time flash places Jin two months into the future from the last time period, and he sees Montand's decayed arm on the ground, next to ruins covered with hieroglyphs. Traveling through the jungle, he sees a pillar of smoke. Returning to the beach, he finds a makeshift camp, including the (still playing) music box which Robert had given Danielle. Nearby he finds the dead bodies of Lacombe and Brennan lying side-by-side. Brennan has been shot in the chest, and Lacombe has been shot in the head. Moving closer, he hears voices in an argument. Approaching, he sees Danielle and Robert: both are armed with rifles.

Danielle is accusing Robert of not being her husband, asserting that he has become infected by the monster. Robert tries to reassure her that he still loves her and has not changed. He insists that the smoke monster is not a "monster" but merely a security system for the temple that they discovered. Robert asks her to put down her gun. When she lowers her weapon Robert raises his towards her and pulls the trigger, but Danielle had already removed the firing pin and the gun fails to fire. Horrified, Danielle shoots Robert in the head. When Jin cries out in alarm she turns towards him, recognizing him from his disappearance. Insisting that he too is infected, and that he was "the carrier," she begins firing at him. Jin rushes into the jungle to hide and experiences another time flash.

Before Jin can react, he hears a gun being cocked and someone ordering him to turn around. Obeying, he discovers that it is Sawyer, accompanied by Daniel, Charlotte, Miles, Locke, and Juliet. Sawyer and Jin happily embrace each other, but Jin is dismayed when he doesn't see Sun and asks about her. ♪ With Charlotte's help translating Korean, they communicate the situation to him. They resume traveling towards the Orchid Station.

While the party is walking single-file along a trail a flash takes them from daylight to darkness. They have virtually no time to recover from the flash.

The next flash takes the party back to daylight. Both Sawyer and Juliet develop nosebleeds. Charlotte collapses, and she begins to speak incoherently, partly in Korean. She tells Jin, "Don't let them bring her back," and "This place is death." Charlotte begins suffering mental time slips, speaking as if she is experiencing events from her past. She asks, "Why can't Daddy come with us?" and makes two statements: "You know what my mother would say about me marrying an American," and "I know more about ancient Carthage than Hannibal himself."

As yet another time flash occurs, Daniel asks for help carrying Charlotte to the Orchid, but Locke refuses, asserting that she will only slow them down. Despite Charlotte's insistence that Daniel should leave her behind, he refuses to do so. Sawyer asks Locke what he wants to do if the Orchid Station is not there anymore. Charlotte tells them, "Look for the well - you'll find it at the well." Accordingly the rest of the group leaves them and continues on to the Orchid.

The group arrives at the ruins of the Orchid, placing them sometime much after the creation of the DHARMA Initiative in the 1970s. Juliet comments that they're lucky the station exists in the current time period. ♪

The Orchid disappears. Something catches Locke's eye, and he heads through the jungle to a nearby stone well with a rope leading into it. Miles asks how Charlotte knew about the well. Meanwhile, Daniel tries to comfort Charlotte. Still suffering the effects of time flashes she tells Dan that she grew up on the Island and mentions the DHARMA Initiative. She describes moving to England with her mother, leaving behind her father, whom she never saw again. Though her mother tried to convince her she had merely imagined the place, Charlotte devoted her life to finding the Island. She also confides in Dan that she remembers a "crazy" man from her childhood who scared her. This man had told her that she must never come back to the Island or she would die.

She tells Dan that she now realizes that he is that man. She appears to lapse back into her childhood and utters she's not allowed to have chocolate before dinner. Moments later, Charlotte dies. ♪♪

Back at the well, Locke attempts to climb down the rope, but Jin stops him, threatening to cut the rope unless Locke promises to not bring Sun back. Jin tells Locke to tell Sun that he has died; a lie to prevent her from returning to the island. Locke is to tell Sun that he buried Jin's body after it washed up on shore. When Locke is unsure how he will convince her of this, Jin gives Locke his wedding ring. After promising not to try to bring Sun, Locke says goodbye to them all and Sawyer helps him down the well. As Locke begin descending the shaft, the sky brightens and there is a light at the bottom of the well. As the flash occurs and the time period changes, the top part of the well becomes filled in, the rope is severed, and Locke falls.

Sawyer discovers the rope he is holding leads to solid dirt. The well is gone. Sawyer frantically tries to dig at the ground, but Juliet tells him to stop.

Locke has fallen into a cavern below the well that appears to be the frozen wheel room and has suffered a compound fracture to his shin. Christian Shephard appears and chides Locke for allowing Ben to turn the wheel, when Christian told Locke to do it. He tells Locke that he must find everyone who left the Island and take them to Eloise Hawking.

When Locke asks about Richard's statement that he would have to die, Christian responds, "I suppose that's why they call it 'sacrifice'." ♪ He instructs Locke to fix the frozen wheel saying it's off its axis. After unsuccessfully asking Christian for assistance, Locke struggles around a corner, where he witnesses the wheel rocking back and forth and emitting flashes of green light. Hieroglyphs are visible in the background. Locke pulls the wheel back into alignment as Christian says to say "hello" to his son. Locke asks who his son is as the room is engulfed by light. ♪

Sun talks on the phone with Ji-Yeon, who is back in Korea. Sun tells her daughter that she misses her and that she met a new friend back in America: Aaron. ♪ After finishing her conversation, Sun pulls out her gun and goes to threaten Ben. He tells Sun that Jin is alive, and he can prove it. Sun yells at Ben that she has spent the last 3 years believing Jin was dead. Kate takes Aaron back, putting him in her car. Ben explains that someone in Los Angeles has proof, he’ll take her and show her the truth, which is the same person that will show them how to get back to the Island.

Kate begins to argue with Jack, accusing him of pretending to care about Aaron and her just to get them to go back. Jack says he was never pretending, but Kate leaves with Aaron in her car. Sayid isn't bothering with it either, and leaves as well after warning Jack that he doesn't want to see him or Ben again. Ben, Sun, and Jack remain, and Sun tells Ben to take her to where he can find proof. ♪

Ben drives the Canton-Rainier van to the church where Eloise Hawking is known to reside. Jack apologizes to Sun for leaving Jin behind, and that he should have waited for him. Sun asks why he’s telling her this now, if it's because he wants to stop her from killing Ben. Jack says after what he just did to Kate "if you don't do it Sun, I will." Ben pulls the car over and yells at them in frustration, claiming he's been trying to keep them safe. ♪

After arriving at the church, Ben pulls out Jin's wedding ring, which he gives to Sun, saying he was sorry he had to hold it until now, and that it was given to him by Locke. Jack brings up that Ben said Locke never went to see him, and Ben says no, he went to see Locke.

Ben tells Jack and Sun that they need to help all those left on the island, and says the woman in the church can help them get back, and that time is running out. Sun looks at the ring in her hand, and agrees.

Desmond approaches the group and asks what they are doing there. He says "Are you looking for Faraday's mother, too?" A stunned Ben doesn't answer him and enters the church. The rest follow shortly and they find Eloise lighting votive candles. She asks Ben why only four of them are here. He replies, "This is all I could get on short notice." Ms. Hawking replies "Well I suppose it will have to do for now. All right, let's get started" and smiles. ♪

Retrieved from "https://lostpedia.fandom.com/wiki/This_Place_Is_Death?oldid=1113922"
Community content is available under CC BY-NC-ND unless otherwise noted.