It is in "?". I watch the new episodes of lost two hours earlier than people from the USA do, so in my haste I added information about The Pearl, it's logo, and its Orientation.  :D ~dissonance

This should be in the Orientation film only as a sub-category --user:nusentinsaino

Unlike the extra bit of flimstrip found in The Arrow, this is a completely new video with a new purpose. It deserves its own entry, with a category listing of 'orientations' to link them together, IMO. ~dissonance

I agree, but I also agree that people are going to get confused...film vs. video isn't really clear, especially in this day and age where they're pretty much interchangable. Maybe it should be "Swan Orientation" and "Pearl Orientation"?--Bremerton 19:42, 10 May 2006 (PDT)

Name of the Ferry and the Doctor

When you listen to the orientation film with the caption on, it is cleary mentionned that they must take the Pala Ferry (exact transcription of the name). And again, the doctor is called Dr. Mark Wickmund in the caption. 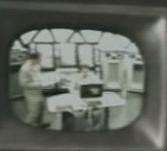 Just re-watching the episode, and noticed one of the screens behind the Doctor shows two people in one of the stations. It doesn't look like same configuration as the Swan dome. Anyone have more input on it? Starts at the 34:30 mark on the ABC free version. --Phil 08:26, 11 May 2006 (PDT)

I am comparing the physical lines between this image and the model from here (http://lostpedia.com/wiki/Image:Scenesfromorientationfilm2.jpg) and it isn't matching up. Most notably, the first series of vertical lines in the Pearl image. In the model as shown by Candel, it is all triagles throughout. --Phil 10:18, 12 May 2006 (PDT)

You shouldn't compare the back video screen with the model.... Instead, compare it in one of the episodes where the losties are in the computer room, and look at the dome. --    Nusentinsaino     talk    contribs    email

Yeah, you're right, its part of the machine that creates the horizontal line. See pictures for comparing:

The first picture shows the horizontal line, however if you look at the second picture closely... it is the machines that cause that.     Nusentinsaino     talk    contribs    email

Retrieved from "https://lostpedia.fandom.com/wiki/Talk:Pearl_Orientation_video?oldid=31651"
Community content is available under CC BY-NC-ND unless otherwise noted.