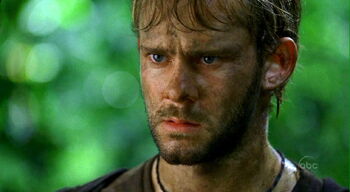 "The Moth" is the seventh episode of Season 1 of Lost. Charlie struggles with withdrawal symptoms after giving his remaining heroin stash to John Locke. Elsewhere, Sayid sets his plan in motion to isolate the origin of the French distress signal, in the hope that it could provide means of finding a way off the Island. Flashbacks in this episode center around Charlie's struggles with the temptations involved with being a rock star and also his older brother's massive ego.

"Bless me father, for I have sinned," says Charlie as he sits in the confessional of a church. He discusses his recent promiscuous experiences, and attributes them to his band, Drive Shaft, which is becoming extremely popular locally, and causing him a lot of temptation. Through counsel, Charlie decides that he must quit the band. Outside the confessional, he finds his rebellious brother, Liam Pace, who shows Charlie a record contract. Their band is finally going to make it big.

Leaving the church grounds, Liam tries to convince Charlie to take up the opportunity. Charlie is unsure, but Liam says he'll watch out for him and promises that if Charlie says so, they will immediately walk away.

At a gig, the band is playing to a hungry crowd when Liam steals Charlie's lines. ♪ Charlie's love for the music conflicts with Liam's "in the moment" attitude, and he is shocked to see Liam's disregard when he retires to the dressing room with a girl in one arm and a wrap of cocaine in the other.

At a later show, Charlie enters the dressing room, ordering Liam's girls to get out. The main singer has missed the sound check, and seeing his brother in the state that he is in, Charlie asks Liam to make good on his promise to walk away. ♪ Liam won't allow it, saying that without the band, Charlie is nothing. ♪ Liam storms out of the room. Charlie sits down and finds Liam's heroin stash. He begins to cry as he looks at it.

Years have passed, and Charlie is in Sydney visiting Liam. His older brother has started a family now, but Charlie wants him to return to the band, which has been given a new opportunity to try and reach out to a US audience in Los Angeles. Liam flatly tells Charlie, however, that he doesn't want to come back, despite the fact they will only be signed if both Pace brothers are willing to return. Liam recalls the night of his child's birth, and how he and Charlie were looking for a fix at the time. He won't return to such a life. He realizes that Charlie is still using heroin, and Charlie shouts back that "you did this to me!" Liam offers to help Charlie kick his addiction, but Charlie leaves, saying that Liam never looked out for him and he has a plane to catch.

Charlie sits playing his guitar in an attempt to keep his mind off the worsening withdrawal symptoms he is experiencing from his heroin addiction. Locke decides to aid him and suggests that the two of them go for a walk; the fresh air will do him good.

On the beach, Jack is talking to Kate about the caves. He wants Kate to join him, but she refuses to give up on rescue. While she believes they will be saved sometime soon, Jack does not share her faith. Sawyer arrives and, as Jack is vacating, tells him that he wants his tent. He waves farewell as Jack heads back to the caves.

Charlie is strolling in the jungle when he hears strange sounds. He begins to run as a boar chases him. He manages to get to high ground, but to his astonishment the boar gets caught in a trap. Locke thanks Charlie for playing the bait, but Charlie simply states that he wants his drugs back. He regrets handing over his stash to John, and in response John says that he can ask for it three times, and he'll return it to him on the third. With his first request already up, Locke warns Charlie to separate himself from instinct and temptation.

Meanwhile, Sayid has hatched an impressive plan to find the source of the French signal. With three antennas positioned at different locations, he can triangulate the source of the signal in the hopes of communicating with whoever might be there. Kate will position one in the jungle, Boone will keep one at the beach, and Sayid will take the third to high ground inland. Unfortunately, the antenna power cells are so dry that they could cut out at any moment. Thus, they must all activate their antennas at the same moment. To do this, Sayid gives them each a bottle rocket (which he says he found on the plane, thanks to fireworks smugglers). When all three rockets are up, they must activate their power cells.

Another problem is that Sayid needs more power, from some sort of electronic equipment. Kate goes to see Sawyer, who has been hoarding numerous items since the crash. He gives her the power cells to a laptop.

At the caves, Charlie is trying to make himself useful by carrying Jack's luggage. The case falls open, however, revealing medicine. Jack sees him and says that he is looking a little ill. Elsewhere in the caves, Jin tells Sun to cover herself up more. However, Sun says it’s too hot and refuses to cover all her bare skin. When Hurley tells Charlie that Jack wants him to move his things as they're "in the way," Charlie stomps into the cave and tells Jack to stop treating him like a kid. His shouting, however, causes a cave-in, and the other survivors look on in shock as plumes of dust rise around them. Charlie makes it out of the smoke, and when asked where Jack is he simply points back at the covered cave entrance.

Hurley orders Charlie to go down to the beach for help and to get Kate at once. He does so, enlisting help from Michael, Steve, Scott, and Boone. Boone is needed for Sayid's plan, however, so he reluctantly asks Shannon to take his place in firing the bottle rocket. Charlie shouts for Kate, and Sawyer says he will go after her.

Out in the jungle, Kate and Sayid discuss the plane crash. If the tail section broke off in mid-air, and the middle section cartwheeled through the jungle, there is no way that they should have survived. Kate says things just happen in life, and that Sayid should just accept some things are without explanation. Sawyer catches up to them, and is about to tell Kate what happened to Jack, but Kate acts curtly toward Sawyer when he joins the group. This causes Sawyer to lie to them, saying that he just came to help out.

Meanwhile, Michael takes over at the caves due to his experience in construction work. ♪ He issues the instructions, impressing Walt. Elsewhere, Charlie finds Locke in the jungle skinning the boar he caught, and tells him about Jack. However, Locke realizes the real reason he is there, and Charlie asks for the drugs a second time. In response, John shows Charlie a moth cocoon. He points out that he could release the moth with his knife, but it would die from being too weak. The struggle is what strengthens, Locke explains, comparing the creature's plight to Charlie's situation. ♪

Sawyer, Kate, and Sayid arrive at Kate's triangulation position. Sayid warns Kate about Sawyer, before heading out to his own position. At the caves, the team manages to make a hole and hear Jack's voice. He is trapped under the rubble and someone needs to crawl through to help him. Charlie volunteers, saying that he can do this. Back at Kate's position, Sawyer asks why she is attracted to Jack. He comments, perhaps accidentally, about what might have happened "if he had survived a few more weeks," causing Kate to immediately demand to know what he means. Sawyer admits the truth about Jack and the cave-in, and Kate throws him her bottle rocket before running into the jungle.

At the caves, Charlie enters the hole and reaches Jack. ♪ A small cave-in occurs behind him, however, leaving both men trapped inside. Following Jack's directions, Charlie fixes the doctor's dislocated shoulder. Kate arrives on the outside and joins the workforce. Not knowing if either man is alive, they start again trying to dig them out. Inside, Jack reveals that he knows Charlie is suffering from withdrawal symptoms, but Charlie notices something else: a moth. He follows it through the dirt and finds light. Fighting through the rocks, Charlie manages to break through just outside the main caves. ♪ Meanwhile, Kate refuses to swap shifts, working herself to exhaustion despite Michael's claims that she is going to kill herself. Charlie and Jack arrive behind the others, much to their surprise, and a relieved Kate hugs the doctor. The group congratulates Charlie for saving Jack.

At five o'clock, Sayid initiates his plan by setting off his rocket. Both Shannon and Sawyer set of their rockets as well, and Sayid turns on the transceiver. He receives a strong signal, but before he can interpret it, someone knocks him unconscious.

Charlie begins to shake at the caves, and Jack lies to Hurley, saying that Charlie is suffering from flu. Charlie goes for a walk and Kate takes his place, giving Jack a handmade sling for his arm. She jokes about the "safe caves" Jack told her about, but he assures her that Michael has checked the rest of the area for its integrity. Kate confirms that she is still heading back to the beach, where she hopes to find out whether Sayid's plan was successful.

Charlie finds Locke, and asks for the drugs a third and final time. ♪ John gives him a sad, betrayed look and gives them to him, asking if he's sure, but after a moment of staring, Charlie throws the whole stash into the fire. Locke smiles, touched, and says, "I'm proud of you." As Charlie looks up, he cries as he sees a moth fly away into the night. ♪

This episode introduces two themes for Charlie: his main theme, which here characterizes his addiction, and a second theme for his redemption.

Charlie's early flight from the boar introduces a Boar motif associated with boar and another associated with animal attacks in general. A later motif is introduced after the first cave-in, and the light action motif that plays during the escape from the caves returns years later in the track "Maternity Hell".

Retrieved from "https://lostpedia.fandom.com/wiki/The_Moth?oldid=1093500"
Community content is available under CC BY-NC-ND unless otherwise noted.