Ladies and Gentlemen. A few words before I start:

1) The creep who BROKE into my room? Not dead. I hit him with the FLAT part of a pretty lightweight iron, guys. Not to mention, I DID check the newspapers.

2) Your comments? Most of them are FANTASTIC… but a few of you really like to go for the knees. Come on, haters… If you ever have the pleasure of trying to take down an insidious international corporation for yourselves one day, I think you might find yourself making a mistake or two as well. Cut a girl some slack.

That said, it looks like we’re all arriving on the same page. OF COURSE, I’ve had my suspicions about this Valenzetti equation… but, I guess I didn’t want to come off like one of those sandwich-board wearing lunatics pointing skyward in the middle of Times Square.

Er…maybe. Let’s take a step back.

Fact is, though he seems to know what he’s talking about, the author Gary Troup didn’t know what was happening at the VIK INSTITUTE. We have to be careful. Sure, he mentions Alvar Hanso, sure he has some interesting things to say about Valenzetti’s Equation – which is WHY I hid the video on that site – but, that interview can’t provide us with conclusive EVIDENCE that Mittelwerk is using the Valenzetti Equation (or even has it!). Without the Valenzetti Equation book itself to fill in the details, we have to take Troup’s interview for what it is: just a good jumping-off point.

Now, as many of you know, the Gary Troup site crashed yesterday. The video is no longer viewable there. Whether the site crashed because of a bandwidth overload or whether the Hanso Squad slipped it a mickey, I can only be thankful that some of you guys (wish I had a name for you…DJ Dan has the ConspiraSpies, who are YOU? I’m taking suggestions…) posted my Zander video up on YOUTUBE. Go there now if you haven’t seen it.

Now, on the topic of those glyphs... Looks like all this is getting to Armand Zander, too.

He emailed me back this morning. The message was short and to the point. It simply contained this image:

Familiar? Some of you hit it right on the head… the glyphs are just like that savant memory test. And, if according to some, when taken together, the hieroglyphs do mean “Die,” then the creep-factor has just risen a few hundred points.

But, what do we think? Is it as simple as that? Should we, in fact, be looking at the glyphs one by one? Is that the answer? What if we rearrange them? What have we GOT here???

I’ve been trying to email Armand Zander to see if any of this makes any sense to him, but for some reason, all my messages are getting bounced back. A computer-generated response keeps telling me his account, which worked fine yesterday, doesn’t exist.

And he’s not answering his phone.

Have they gotten to him?

Is this the Valenzetti Equation or something else? Would they really get rid of someone to protect it?

Saying a prayer for Zander…

There is a new topic on the message board today, called 'Spy me to the moon.' It tells us how to use the word clues we've been given (all 6 of them), and that there will be 2 new clues in the next 2 days

NOTE: Fiberoptician's last two posts in the thread are timed at 11:05 pm -- this may or may not be a typo.

The current clues point to: www.richerdeeperbroader.com/welcome/your/next/video/ (appears to be invalid at the moment)

A new newsletter has just come out: 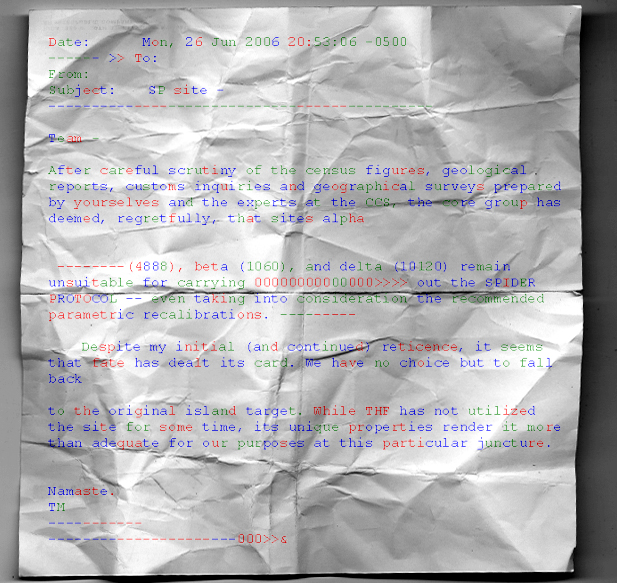 DSLerator over AIM (declared in-game) has been giving people the link to Mandrake Wig's MySpace acct: http://www.myspace.com/mandrakewig Speaker in ITE has made the statement "Keep your eye on that site" when asked if the site was fan-made or considered an official part of TLE. Mandrake Wig was the "Manny" character who sent out the newsletters from the ROT site.

Retrieved from "https://lostpedia.fandom.com/wiki/The_Lost_Experience_clues/June_29?oldid=1121342"
Community content is available under CC BY-NC-ND unless otherwise noted.