DJ Dan's new podcast is out, the link can be found on Sublymonal.com by typing in hello, then BigD in the talking Lemon head section, which is found by clicking the left screen.

Take note of the first letter of all the items in the lower part of the image - they spell out the password: recluse.

Lightened picture
Add a photo to this gallery

There is now a clickable link on the word "mortality" in the page text. Use the "recluse" password from Persephone's image to access a letter from Dr Eliza Vasquez about the health of 'S Hanso' (Note: The S in "S Hanso" is most likely a salutation, as she refers to him as "Señor" in the letter). There is also some very interesting security camera footage.

Persephone then asks for a second password, the surname of the head of the Vik Institute, which is "zander".

After entering the second password, Persephone informs us that she believes Thomas Mittelwerk to be behind everything. Her message begins to cut out with what looks like a wheel symbol in the background appearing, and a similar sound made by the Swan station in the Season 2 finale during system failure is heard.

Previous Persephone clues then flash across the screen quickly, and a new image then appears from THF in the Swan hieroglyph colors (note that a split-second message is visible, saying 'nobody is safe'):

Note: Be careful after you watch that, because you will not be able to go again on thehansofoundation site. However, regaining access to the THF is easy by putting in another website title, like test.thehansofoundation.org (but, it doesn't seem possible to input the 'recluse' password again this way, clearing the Macroflash cache seems the only solution). 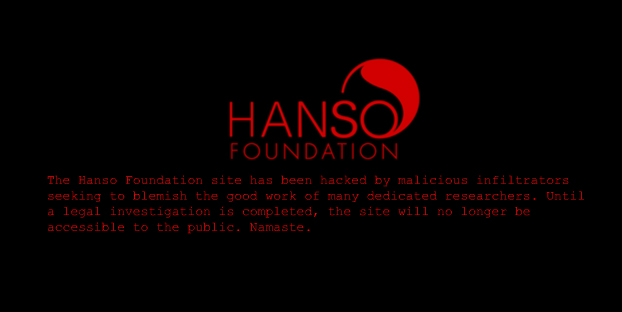 This image is now the entire Hanso site. Upon decompiling this, the original text of the message was "SAVE ME"

If you let your mouse sit still you'll hear a growing noise and after 110 seconds (1 minute 50 seconds) the message "orientation testing version 1988" will flash very briefly directly under the Hanso Logo. You can also right click the page and click play to hear this message.

Retrievers of Truth forum has been updated, however it's updated for the 19th of june. It links you to www.broadbandstories.com, where there is a video by DJ Dan. It seems to be another advert within the Lost Experience and not an actual clue.

A new video was discovered on Monster.com. It was of a young lady named Rachel Blake, she appears to a detective researching the Hanso Foundation. Similarity in voice tone and speech patterns lead some to believe she might the true identity of Persephone (even though she refers to Persephone in the third person.). She makes reference to Alvar Hanso, Thomas Mittelwerk, and the DHARMA initiative.

This video was found seemingly by random or leaked by someone with insider knowledge, as the trail linking players to this video has yet to surface. It was confirmed as in-game by The Speaker, but then deleted from his blog , because "we shouldn't see it yet".

Retrieved from "https://lostpedia.fandom.com/wiki/The_Lost_Experience_clues/June_16?oldid=449585"
Community content is available under CC BY-NC-ND unless otherwise noted.