Start a Wiki
The Lost Chronicles: The Official Companion Book 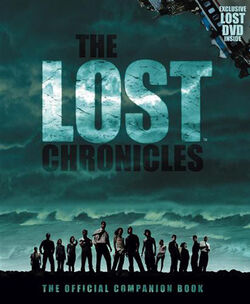 "When Lost debuted on ABC last fall, viewers were immediately captivated. On a remote South Pacific Island, 48 plane crash survivors are forced to scavenge what they can and battle cruel weather and, at times, each other. Some panic. Others pin their hopes on rescue. And some find strength they never knew they had. But the island has many secrets and hidden dangers as more than 17 million viewers are discovering. The Lost Chronicles is the must-have guide for those fans. Filled with a detailed episode guide and a behind-the-scenes look at the making of the show, the fully illustrated book offers plot twists and back stories that will help fans uncover the mysteries of Lost. Also included are reflections and anecdotes from cast members, writers, and executive producer/creator J. J. Abrams that readers won't find anywhere else. In addition, the book comes with an exclusive hour-long DVD containing unaired scenes from the show. Lost is known for compelling and mysterious story lines. Each episode features the back story for one character, while new stories develop on the island. This companion serves as a resource for viewers and will take them through the trials and tribulations of the survivors on the island, as well as the histories of the characters."

Retrieved from "https://lostpedia.fandom.com/wiki/The_Lost_Chronicles:_The_Official_Companion_Book?oldid=1053147"
Community content is available under CC BY-NC-ND unless otherwise noted.