Start a Wiki
"The Hunting Party" 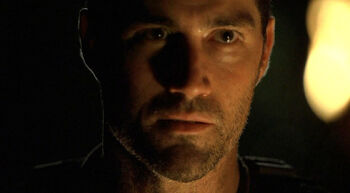 "The Hunting Party" is the eleventh episode of Season 2 of Lost and the 36th produced hour of the series as a whole. Jack faces tension as he wakes to find a gun-toting Michael, who leaves to find Walt. With the help of Locke and Sawyer, Jack heads out to bring Michael back before the Others kill him.

Jack and Christian diagnose an elderly man with a spinal tumor and determine he's not a candidate for surgery. However, the man and his daughter reveal they specifically sought out Jack, whom they know helped his wife to walk after her spine was crushed in a car accident. They are looking for a miracle, and much to his father's dismay, Jack agrees to perform the surgery.

Jack and the man's daughter, Gabriela, form a connection - a dangerous one, according to Christian, who warns Jack to keep his distance. But Jack is spending nights and weekends at the hospital, working overtime, while Gabriela is there at her father's side through a series of tests and pre-surgical procedures. This is causing disharmony at home; Jack and Sarah's marriage is paying the price because Jack is considered a "miracle worker." She tells Jack that the pregnancy test she took was negative. He asks if she wants to talk about it, but she refuses. She gets up, says, "See ya later, Jack" and leaves the room.

After seven and a half hours of surgery, Jack loses his patient on the operating table. Christian blames the man's age and weakened heart, but Jack blames himself, frustrated at his inability to save him. Jack leaves the hospital and finds a distraught Gabriela in tears, waiting in the parking lot. In a moment of grief and weakness, they share a kiss. Jack pulls away and tells Gabriela that he can't. He returns home to Sarah and comes clean about the encounter. He vows that things will be different; he's going to put more effort into their marriage; he's going to fix it. But Sarah feels Jack will always need something to fix. Sarah tells Jack she is leaving him and she has been having an affair for some time. Jack lets her leave without much of a fight. ♪

Jack wakes up in the Swan to find an unconscious Locke lying on the floor in the armory. Behind him, Michael shows up with a gun, aiming at Jack. He tells Jack he is going on a journey after his son, because it is his right as a father. Jack offers to join him, but Michael says he has to do it alone; he locks both Jack and Locke in the armory.

When Locke finally wakes up, Jack tells him what happened. Locke confesses and says he gave Michael a gun for shooting practice. Back at the beach, Kate wakes Sawyer up so that Jack can change his bandages. They enter the Swan and discover Locke and Jack are locked up in the armory. While Kate enters the Numbers into the computer and pushes the button, Sawyer opens the armory door, finding Jack and Locke collecting guns for their mission to try and stop Michael. Sawyer decides to join them, claiming that he needs his doctor around him.

Kate also wants to join, but Jack angrily refuses and orders her to stay behind to take care of the button. The hunting party leaves, without Kate.

On their way across the Island, Sawyer asks Jack why he did not let Kate join them. Jack responds with a sarcastic remark about going back to see if he hurt her feelings. Locke figures out that Michael is not going back to where the Tailies came from. Back at camp, Hurley tells Sun and Jin that Michael took off, stole some guns and "went all commando." Jin begins to pack, hoping to catch up with the hunting party, but Sun stops him. He tells her Michael is his friend, and Sun responds that she is his wife.

Back on the trek, Jack and Locke debate whether they have the right to tell anyone what they can or can’t do; they also discuss what Jack will do once they catch up with Michael. The three of them climb a mountain in the jungle while Locke and Sawyer discuss the meaning of Sawyer's nickname. Locke says he knows his real name is James Ford, and asks who he got his nickname from. Sawyer says, "Who says I got it from anybody?" Seven gun shots are heard in the distance. They run towards the sounds. Locke finds a mark on a tree where a bullet grazed it. They also find three of Michael's shell casings. Sawyer encourages them to keep going, and Jack asks him if he is out here for Michael or for payback for getting shot. Sawyer asks Jack the same question, which he does not answer.

At night, the three of them argue after Locke loses Michael's track. Their disagreement is interrupted by a familiar face in the middle of the jungle, who apparently knows their names. Sawyer recognizes him as "the son of a bitch that shot me on the raft" and tries to shoot him, but a bullet from the bushes grazes Sawyer's ear. Jack asks where Michael is; the man responds that Michael is not going to find them, and asks John to build them a fire.

Back at the Swan, Charlie and Hurley thumb through records and discover an old album by a band called "Geronimo Jackson." They discuss whether Claire misses Charlie, and whether Hurley has a chance pairing with Libby. Sayid shows up, asking where Jack and Locke are. Hurley and Charlie update him and tell him about Michael's quest, and that everyone went after him - Jack, Locke, Sawyer...and Kate.

Back in the jungle, the bearded man says Walt is fine, and he's a very special boy. He chastises them for walking into someone's kitchen, eating food that is not theirs, opening doors to rooms they have no business opening. He also quotes "somebody a whole lot smarter than anybody here," saying, "From the dawn of our species, man's been blessed with curiosity." Jack says he doesn't believe him, and points out that Ethan was sent as a spy, and that Locke, Sawyer, and himself outnumber the Other. The man says that's an interesting theory, and shouts "Light 'em up!" A ring of torches lights up around them, and the hunting party members realize they are surrounded.

The bearded man warns the three of them that right there, there is a line, and they are not allowed to cross it. If they do, they would go from "misunderstanding" to "something else." He also says that the Island is theirs, and the survivors still live on it because "they" let them live on it. He calls an Other named Alex to bring "her" out. A head-bagged and gagged Kate comes out with her hands tied tightly behind her back and her bare feet tied tightly together. Jack is enraged, and for a few seconds it seems he'd rather allow Kate to be murdered rather than hand over the guns. But he relents, and Kate is allowed to go free. The Others disappear, and the four castaways return to camp. ♪

On the trek home, Jack is still angry that Kate disobeyed his orders. She tries to apologize, but he shuts her down and gives her the cold shoulder. Sawyer offers a few encouraging words as the group leaves her at her tent. On the beach, Jack turns to Ana Lucia and says he heard she was a cop, and that she killed one of "them." When she confirms these facts, Jack asks her how long it would take to build an army.

Retrieved from "https://lostpedia.fandom.com/wiki/The_Hunting_Party?oldid=1107362"
Community content is available under CC BY-NC-ND unless otherwise noted.