This article is about the episode. For the item, see glass ballerina. 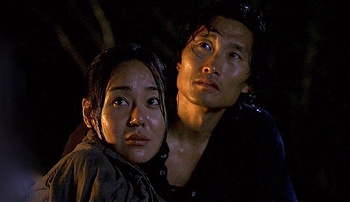 "The Glass Ballerina" is the second episode of the third season of Lost, and the fifty-first produced hour of the series as a whole. Jin, Sun, and Sayid worry when Jack, Kate, and Sawyer make no contact with them after they have lit the signal fire. Meanwhile, the Others realize that the survivors have acquired a sailboat.

A glass ballerina flies through the air gracefully, and then smashes on the floor. A young Sun-Hwa Paik runs away with fear. Later, her father confronts her asking if it was she who broke the glass ballerina. Sun denies breaking the glass figurine, telling her father that it was the maid who broke it. Despite her father's threat to fire the maid as a consequence, she stands by her accusation.

Years later, Sun is in bed with Jae Lee, the man who offered to give her lessons on how to speak English. Feeling guilt she reminds him that she is married and so she cannot go on further. Jae Lee offers her a string of pearls, saying that he doesn't want to share her anymore, and offers that they go to America and start a new life. Before she can answer, Sun's father breaks into the room, and tells a deeply ashamed Sun to get dressed.

Sun watches Jae's funeral from a far distance, not wanting anyone to see her. However, her father spots her and confronts her about why she is there. Sun questions her father as to whether or not he would tell Jin about her and Jae's relationship. He said that it was not his place to do so, and left, telling Sun to go home to her husband. ♪♪

Mr. Paik assigns Jin, Sun's husband, the task of "putting an end" to Jae Lee's "stealing" from him. When Jin refuses, threatening to quit if this must be his job, Paik gives a speech to Jin, referring to him as "son". "My shame is your shame," Paik tells him. Jin finally accepts.

When Jin arrives home, he is further aggravated by Sun and her risky suggestion to run away to another part of the world. He reminds her that what he does for her father is the cost of being able to be with her. He leaves the room to "deliver the message".

Later, Jin waits in his car. He follows Jae Lee to his hotel room and violently attacks him and puts a gun to Jae Lee's head and is about to kill him. Jae Lee cries that he's sorry, thinking that Jin is attacking him because of his affair with Sun. Jin cannot bring himself to pull the trigger and warns him to leave Korea and never return. As Jin sits in his car afterward, the body of Jae Lee falls from above onto the hood of the car, clutching the pearl necklace he wanted to give Sun.

On the Elizabeth and at the Pala Ferry

Sun washes her face in the bathroom of the Elizabeth. As Jin enters to check on her, she tells him it's morning sickness. ♪ They go to top deck where Sayid is waiting. The three of them debate the best course of action, Sayid thinks of moving to a different part of the island because the mountains may be blocking Jack's sight of the signal fire, but Jin refuses, as he thinks he is the only one who knows how to sail. But he is wrong as Sun knows too, and she will help Sayid.

While sailing to the mountains, Jin questions Sun as to why she even came with Sayid and him in the first place. She simply responds that he knows why, she must be with him.

On the boat, Jin angrily prepares some fish. Jin, Sun, and Sayid spot the Pala Ferry dock. They believe that it is the Others', but Sayid says that it has not been used for some time and whoever built it, "they're not here now." Sayid tells Jin that the dock is overgrown. They decide to dock. Jin does not think it is safe but Sayid says, "Of course it's safe." ♪

As Sayid, Sun, and Jin build the new signal fire, Sun questions why it is so large. Sayid says that it is so that Jack will see the smoke, but Sun asks him why he is lying. Sayid admits that he suspects that the other party has been captured, and he plans to provoke an attack by the Others in order to capture two of them as hostages, and kill the rest. When Sun asks why they must capture exactly two, Sayid replies that it is to make the other one talk. Sayid thinks that Jin will be too concerned with Sun's safety to carry out this plan, and asks her not to tell him for another twenty minutes, when it will be too late to change plans.

Jin later demands a gun from Sayid, telling Sun that he understands English better than she thinks he does, and he knows that she has betrayed him. Sayid gives him a gun, asking if he can handle it. But before he can finish his sentence, Jin has checked that the gun is loaded and has it prepared. Sayid looks surprised while Sun looks away, apparently in shame. As Jin walks off, Sayid tells Sun that there is another gun hidden on the boat in the blue tarp, just in case the others get past Jin and himself. Sun tells him that if they get past, that means Jin is dead and that she won't care to live any more.

Once night falls, Sayid and Jin look into the jungle from a tree, guns ready; but at the same time, group of Others board the Elizabeth from the water, avoiding Sayid and Jin's trap on the beach. Sun hears noises above deck and gets the gun. Colleen climbs down into the lower deck and sees a pot on the stove. Colleen hears a noise and turns to find Sun pointing a gun at her. Sun says that she wants them to let her off the boat. Colleen refuses saying that she can't do that. She knows Sun's full name and knows that she is not a killer. She then states that "We are not the enemy; but if you shoot me, that's exactly what we'll become." As the engine starts up, Colleen approaches Sun, who shoots Colleen in the stomach. Sun narrowly avoids the gunfire from Tom and Ivan, who see her downstairs after the gunshot. Sun escapes the Elizabeth by jumping overboard and swimming through the darkness. ♪ Meanwhile, Jin and Sayid realize what is happening and they run towards the Pala Ferry. Jin jumps into the water after Sun, and the two embrace after finding each other. ♪ Back at the beach, Sun sits, dripping wet, when Jin comes to embrace her. Sayid then comes to tell how sorry he is and that he will listen to Jin in future. He says that they should go: they have a long walk ahead of them.

Juliet brings Jack soup she made herself. When Jack pays her no attention, she leaves and knocks on a door, which Ben opens. Behind him we can see TV monitors with security footage. As Ben and Juliet share a moment outside Jack's cell, Colleen enters by a ladder, warning Ben that Sayid has discovered the decoy village, and that he has somehow acquired a sailboat. Although Juliet states that this is not a threat—they'll just sail around in circles—Ben and Colleen seem worried that they will find the Hydra. Ben tells Colleen to gather a team and that he wants that boat.

Later, at the cages, Sawyer wins another fish biscuit. Danny Pickett and some more Others open the cages and give them lunch. They escort Sawyer and Kate along a path way. They cross paths with Colleen's team, and she asks Pickett to wait. She whispers something to him about her mission. He tells her to be careful and kisses her on the cheek. Sawyer watches with a smirk.

Sawyer and Kate are taken to a quarry where a number of others are working. Pickett tells Kate to break up the rocks and tells Sawyer to move them. He also warns them that if they attempt anything that "pisses him off" they will be shocked with the stun gun. When Kate demands to see Jack, Pickett shocks Sawyer as her punishment for speaking.

While Kate is working, Alex hides in the bushes and asks her if she has seen a boy in the cages. Kate replies that she hasn't seen him. Alex then tells Kate that the dress Kate is wearing was hers, but that Kate looks better in it.

Sawyer catches Juliet's eye as she drinks water. She offers him the bottle, but despite her friendly smile, Sawyer simply upends the bottle in a gesture of defiance. Sawyer breaks the rules and kisses Kate in an apparent display of romantic passion. ♪ Pickett steps in to separate them, Sawyer punches him, sparking a fight. Luke and others try to suppress Sawyer, but he overpowers them and grabs a dropped rifle. As Sawyer looks up, he sees that Juliet is holding Kate at gunpoint and she tells James to give up. Sawyer reluctantly drops his resistance.

That evening back in their cages, Sawyer speaks to Kate and reveals he was testing the strength of their guards and that it seemed that the others weren't used to violence. He also says that Juliet would have shot Kate without hesitation and that now they have to wait until the Others make a mistake. Kate asks Sawyer why she called him James and she tells her that it is because it is his name. While they talk, Ben is watching and listening to them on the security monitors.

In the aquarium, Ben visits Jack. He jokes, telling him a week ago they were in the exact opposite situation: Ben was locked up in the Swan, and Jack was the one coming in for visits. He then goes on to tell Jack that he lied about his identity because if he had told the truth about being a member of the group that the survivors call "the Others," it would have been right back to Sayid and his fists. Ben then tells Jack that he wants him to change his perspective on things. He then introduces himself as Benjamin Linus and offers his hand which Jack rejects. He also tells Jack that he has lived on the Island his whole life and that Jack's friends are close by. Ben tells Jack that he will need him to do something for him in the future and he will take him home, just like he did for Walt and Michael. Jack then tells Ben that he thinks that the Others are stuck on the Island just like them. Ben proves that the Others have contact with the outside world by telling Jack about events that have happened since Flight 815 crashed, including the re-election of US President George W. Bush, the death of Christopher Reeve, and the Boston Red Sox winning the World Series. Jack laughs at this. Ben shows Jack the video of the Red Sox winning the World Series. Ben tells Jack that he will take him home if Jack helps him when the time comes.

The Season 3 soundtrack includes the two cues from this episode. "Fool Me Twice" includes Ben's theme and the Others' action theme. "Pagoda of Shame" is a new statement of Jin and Sun's theme.

Retrieved from "https://lostpedia.fandom.com/wiki/The_Glass_Ballerina?oldid=1117527"
Community content is available under CC BY-NC-ND unless otherwise noted.