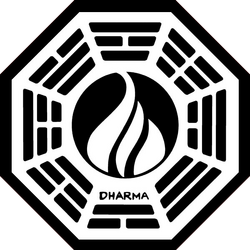 The Flame was a DHARMA Initiative communications station. Its name and symbol were first seen depicted on the blast door map. According to the DHARMA cabling map, the Flame was northeast of the Barracks, and about a day and a half north from the Survivors' camp. The station was completely destroyed by John Locke.

The Flame consisted of a large building with a roof-mounted satellite dish. The interior was divided up into a living / kitchen area, a storage facility and a separate computer room. A hidden trapdoor provided access to a basement storage facility. ("Enter 77")

The Flame was constructed by the DHARMA Initiative some time before 1973 and was used as a means of communicating with other stations on the Island as well as the outside world. The Flame was described as being "the hub" with cables leading from the Flame out to other DHARMA facilities all over the Island. ("Enter 77") In 1977, Stuart Radzinsky appeared to be the sole operator of the station - working, in his spare time, on a model for the ongoing construction of the Swan. At Jin's request, he sent out an Island-wide broadcast to all DHARMA stations and facilities. Radzinsky, believing Sayid to be one of the Hostiles, imprisoned him briefly in the pantry area before transfering him to the Barracks. ("Namaste")

Extremely concerned about a potential incursion by the Hostiles, the DHARMA Initiative had wired C-4 charges throughout the lower level of the Flame. The makeshift nature of the work appeared to suggest the charges were added later and were not included in the station's initial design. The station computer contained a special security code (77), which, when entered by an operator, would trigger the C-4 on a short time-delay. ("Enter 77") It is not clear why DHARMA preferred the destruction of the station to seeing it fall into the hands of the Hostiles, but it appears the Purge took place too swiftly for the explosives to be triggered.

Some time after the Purge, the Others installed Mikhail Bakunin at the station. Mikhail's duties included monitoring, gathering intelligence, and communicating with Others in the outside world. Mikhail appeared to be somewhat tempermental and was apparently prone to shooting individuals who approached the station unannounced. At Ben's request, Mikhail opened a live off-island video feed from Richard Alpert in Miami, showing Juliet that her sister Rachel and Rachel's baby were both alive and well. Mikhail also assembled detailed files on all of the survivors of Oceanic Flight 815. ("One of Us")

When Locke, Sayid, Desmond, Nikki, and Paulo visited the Pearl station, Sayid was able to patch into a live video surveillance feed to the Flame. Mikhail, wearing a DHARMA Initiative jumpsuit and eyepatch appeared, looking directly into the camera for a few moments before turning it off. ("The Cost of Living") It is likely the activation of the camera at the Flame may have tipped off the Others to expect imminent visitors - hence the removal of the monitors and Mikhail's elaborate cover story.

As a result of the discharge at the end of Season 2, the Others temporarily lost communication across the Island. A short time later Bea Klugh was sent to the Flame to talk to Mikhail and determine what was happening. Shortly thereafter a group including Kate, Locke, Sayid, and Danielle came across the Flame station while looking for Jack. On approaching the station, Sayid was shot by Mikhail. Mikhail attempted to pass himself off as a surviving member of the DHARMA Initiative, but was ultimately unsuccessful. Both Mikhail and Bea Klugh - who was found hiding in the basement of the Flame - were captured. In briefly breaking free, Mikhail shot Bea on her own orders and then attempted to shoot himself, but was overpowered by the castaways. Sayid located the DHARMA cabling map in searching the basement of the Flame which ultimately led them to the Barracks.

Meanwhile, Locke inadvertantly unlocked access to the video menus hidden behind the computer's chess game and entered the 7-7 Code. Minutes later, upon departing the station, the Flame was destroyed. Mikhail's cat and at least one of the cows survived the destruction of the station. ("Enter 77")  ("Confirmed Dead")

Later, in Day 90, Sayid used the same map from the flame to locate another DHARMA station called The Looking Glass.

In 2004 when discovered by the survivors, the main building of the Flame resembled a large farm-house surrounded by a large cow paddock. On Sayid's approach, he observed a number of cattle, a horse, and Mikhail's cat. Atop the main building was a large weathered satellite dish used to communicate with the outside world. Nearby, in the yard were a group of loudspeakers with a light, although several wires running from them had been cut. The purpose of the loudspeakers is unknown. Mikhail also mentioned growing tea, suggesting there may have been a garden area somewhere nearby. ("Enter 77")

In 1974, the area around the station was equipped with a number of motion sensors. It is unknown if these sensors were still operational in 2004. ("Namaste")

The central living area had several comfortable couches, chairs, a coffee table, and rug surrounded by several other pieces of furniture. Adjoining doors led to a well-stocked kitchen with a working freezer and a large bedroom. On a table in the bedroom was a Cyrillic-keyed typewriter on the table containing a document presumably written by Mikhail. ("Enter 77")

There was also a separate pantry or storage room. ("Namaste")

On the wall of the living room area was a poster of Romanian Olympic gold medalist gymnast Nadia Comaneci, and Mikhail claimed to have named his cat after her. ("Enter 77")

The rug in the living room concealed the entrance to a trapdoor providing access to the Flame's basement.

When discovered by Sayid, Locke, and Kate in 2004, the computer room contained a good deal of electronic equipment, including a computer and several other mainframes similar to those housed in the geodome at the Swan. A small ceiling camera was also in the room, directed at the operator's seat for the Flame computer. ("Enter 77") The survivors were able to tap into this video feed previously at The Pearl -- seeing Mikhail for the first time at this location. ("The Cost of Living")

In 2004, the Flame computer was running a chess game designed to allow the station's operator to play against a computer opponent. A victory in the game, however, allowed the user access to additional hidden station functions accessed through a video menu system. The videos featured Dr. Pierre Chang of the DHARMA Initiative. Options included ordering a supply drop, communicating with the outside world (non-functional), accessing a sonar buoy system intended for offshore submarines (non-functional), and reporting that an incursion of the Hostiles had occcured. Mikhail claimed that he had never been able to defeat the chess game and that the computer "cheated" - likely an attempt to discourage Locke from discovering these hidden features. ("Enter 77") As the computer controlled a number of common functions such as mainland communications, it seems highly likely that there must have been another means to access this hidden functionality outside of the chess game.

The computer system in manual mode featured a series of numeric menu codes:

If the user failed to access mainland communications followed by a failure to access the sonar system, a new menu option was offered:

In 1977, Radzinsky was observed using the computer to read reports coming in from other stations including The Looking Glass. ("Namaste")

Previous to the survivors' arrival, the computer room also housed a large bank of television monitors capable of receiving video feeds from the outside world. After the crash, Mikhail was able to to access news stations reporting live on the disappearance of Oceanic Flight 815. The console was also capable of receiving and sending transmissions from the outside world. At Ben's request, Mikhail was able to contact Richard in Acadia Park in Miami -- who was able to broadcast a live video feed of Rachel. ("One of Us") This same control panel was used by Stuart Radzinsky to broadcast an Island-wide message at Jin's request in 1977. ("Namaste")

As the monitors were not present when Sayid, Locke, and Kate arrived at the station in 2004, it seems likely the Others had some means to conceal them or had previously removed them. Per Mikhail's elaborate cover story claiming to be the last surviving member of the DHARMA Initiative, it seems likely that the Others were aware that they were about to have company at the Flame. ("Enter 77")

The monitors bore a resemblance to similar banks of monitors seen elsewhere on the Island at the Pearl, the Hydra, and the Barracks security room. It is unknown if one could use the monitors bank to tap into video feeds from other parts of the Island.

Accessed via a hidden trapdoor from the main building, a ladder descended into a basement facility that appeared to have several adjoining rooms. One room contained numerous boxes and bookshelves full of DHARMA manuals. Sayid looked at two three-ring binders with titles of "Food Drop Protocol" and "Operations Manual". The latter contained a communications cabling map showing the Flame's location relative to the Barracks. Other rooms appeared to contain numerous boxes and a rack of DHARMA jumpsuits. Given the amount of material stored down here and that taking everything up and down a ladder would rapidly become tedious, it seems highly likely there was another exit not shown.

The entire basement was also rigged with numerous C-4 charges mounted along the ceiling at strategic intervals. Given the makeshift nature of the rigging, it seems likely these charges were added at some point after the station's construction. ("Enter 77")

It is likely that the "Food Drop Protocol" was a reference to the DHARMA resupply drops on the Island.

In the video game Lost: Via Domus, the Flame possessed a hidden entrance inside the perimeter of the sonar fence near the Barracks (This tunnel can be seen on the Cabling map). The entrance led into a corridor which went to the underground area of the Flame Station -- although oddly the door had the Swan logo on it. The inner depths of the underground area of the Flame were seen in greater detail. The basement was comprised of numerous storage rooms, a bank of television monitors, a living space for several people, and a small equipment hangar. There was a ladder that led up into a small storage room that was next to Mikhail's bedroom. It's worth noting that this section was not the same basement area seen in Enter 77. That basement area was located under the kitchen, the living room, and the computer room. However, the basement in Via Domus was located under the bedroom, and somewhat outside. Although the storyline of Lost: Via Domus is non-canon, the locations are considered canon.

The Flame on the blast door map

The Flame appeared on the left side of blast door map near an area close to a dividing river. The actual text from the map was: "ALLEGED LOCATION OF #4 THE FLAME" next to a hand-drawn logo of the station. The map suggested that the Flame was relatively close to the survivor's beach camp, although the party that found the Flame hiked for two days before reaching it. Given that the Staff was much closer, it appears the map was incorrect. Several notes were listed in proximity to the Flame:

Retrieved from "https://lostpedia.fandom.com/wiki/The_Flame?oldid=1116497"
Community content is available under CC BY-NC-ND unless otherwise noted.