This article is about the episode. For the character referenced in the episode, see Economist. 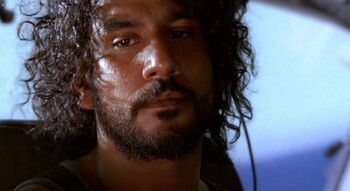 "The Economist" is the third episode of Season 4 of Lost, and the seventy-fifth produced hour of the series as a whole. It was originally broadcast on February 14, 2008. Locke’s hostage may be the key to getting off the Island, so Sayid and Kate go in search of their fellow castaways in an attempt to negotiate a peaceful deal.

Sayid is praying near the helicopter while Jack and Miles argue about what to do about Ben and Charlotte. Miles wants to retrieve them, but Jack is more cautious. Sayid goes to Naomi's body closes her eyes and covers her with a blanket. He finds a metal bracelet she wears and takes it off of her wrist and reads an inscription on it: "N, I'll always be with you. R.G." ♪

Meanwhile, Locke and his group are trekking through the jungle. Sawyer suggests torturing Ben to find out who is Ben's spy on the freighter, but Locke thinks it would be pointless. When they arrive at the place where Jacob's cabin used to be, Locke finds the ash on the ground that was there on his first visit, but there is no trace of the cabin. Hurley awkwardly expresses his disagreement over Locke's plan to keep Charlotte as a hostage, but Locke admonishes him and makes it clear that he is making the decisions. They head on to the Barracks.

At the helicopter, Sayid offers to go and retrieve Charlotte from Locke. He believes that he can do it safely without violence while Jack will only cause violence. He gets Frank to promise that if he brings Charlotte back, Frank will take Sayid to the freighter. ♪ Miles and Sayid prepare to go retrieve Charlotte. Jack suggests to Kate she should go with them because he doesn't trust Locke, and the three set off to the Barracks. Sayid has Naomi's bracelet.

Daniel takes the opportunity to perform an experiment. He sets up a tripod with a beacon and a clock on it, then asks Frank for his phone so he can call Regina. Frank hands it over on the condition that he hang up if Minkowski answers. Daniel agrees and phones the freighter, getting Regina. He asks her to send a payload (a small rocket) to his beacon. Regina does so and begins counting down the arrival of the payload in rapid 5-kilometer-steps, starting with 40 km. But when she reaches zero the rocket has not arrived. ♪ Regina claims that is "weird," while Daniel responds that it is "far more than weird." Some time later. to Daniel's surprise, the rocket finally arrives. ♪ Daniel compares the time on a digital clock from the rocket with the one from the tripod and sees that they are different by (00:31:18) 31 minutes and 18 seconds. Concerned, he says to himself "Oh no, this is not good."

Sayid, Kate, and Miles reach the Barracks and find it deserted. They sneak around the settlement and hear muffled banging, which leads them to Hurley tied up in a closet. Hurley tells them that he was left behind by Locke. He says that he tried to talk Locke out of threatening Charlotte and that Locke tied Hurley up in the closet. Hurley says that he doesn't know where the rest of Locke's group went, but that they were going to stop at Ben's house before they left.

Sayid, Miles, and Kate head to Ben's house and begin to search it. While Kate searches the bedroom, Sayid finds a hidden walk-in closet off the living room. In the closet are sets of nice clothing and several bureaus. Opening drawers, Sayid finds bundles of banknotes different countries and several passports also from different nationalities, presumably all Ben's. The Swiss passport Sayid opens lists his name as "Dean Moriarty". ♪

In the bedroom, Kate is searching under Ben's bed when she sees a pair of feet enter the room. When she stands up she sees Sawyer. He motions for her to be quiet, but Kate yells for Sayid. When Sayid runs out of the closet he finds Locke pointing a gun at him. In the kitchen, Rousseau has a gun pointed at Miles. As the three of them are herded together, Hurley appears and apologizes for lying.

Locke takes Sayid to the Others' game room, where Kate had been imprisoned before. There Sayid finds Ben. ♪ Meanwhile, Kate and Sawyer talk about why they decided to go with Jack and Locke, respectively. When Kate explains she went with Jack because she believes the freighter can get them off the Island, Sawyer asks her why she's so anxious to go back to prison, adds that he has nothing to go back to himself and implies that they could live a better life together in the barracks. Kate responds by asking how long they would be able to "play house". Sawyer responds "why don't we find out?" ♪

Locke apologizes to Sayid for the ruse, saying it was all to find whether or not the three of them were alone. Sayid indicates that he does not trust Miles and his people either, and suggests that he can find out more if he takes Charlotte and goes to the freighter. Locke says he won't turn over Charlotte for nothing, Sayid hints at a deal. At the helicopter, Desmond has arrived back with Juliet. He confronts Frank about the picture Naomi had of him and Penelope. Frank refuses to answer. Desmond gets angry and demands that Frank take him to the freighter on the next flight; Frank agrees. As they finish talking, Sayid and Charlotte coming over the hill. Kate and Miles are nowhere to be seen. When Jack asks what happened to Kate, Sayid tells him that she decided to stay with Locke.

Sayid says that he traded Miles for Charlotte. Frank accuses him of being dishonest about their deal, but nonetheless agrees to take Sayid to the freighter because Miles was "nothin' but a pain in my ass" anyway. Frank offers to take a third person, but both Charlotte and Daniel want to remain on the Island for now. Sayid insists that they take Naomi's body.

As Sayid and Desmond load Naomi into the chopper, Daniel takes Frank aside and tells him that no matter what happens, they must fly on the exact same bearing they used to get to the Island. Frank agrees to do as Daniel says and lifts off, piloting the chopper off of the Island. ♪

Sayid is playing golf in the Seychelles. A man approaches on a golf cart and begins a conversation. Sayid seems reluctant to converse with him, saying that they have paid a premium for privacy at the Club. The man asks Sayid what he does for a living; Sayid replies that he lives off of a substantial settlement he received from Oceanic Airlines, revealing that he is one of the Oceanic Six. On hearing this, the man becomes nervous but they play out their shots for a €100 wager which the man wins. When the man goes to leave Sayid calls him by his name, Mr. Avellino, and shoots him dead. Sayid calmly walks away.

At some other time Sayid walks into a swank cafe in Berlin, Germany during the winter. The only empty seat is at a table where a blonde woman is working on her laptop. Sayid asks her for directions to Potsdamer Platz. She gives them to him in North American English and introduces herself as Elsa. When Sayid asks her what she does, she tells him that she works as a personal assistant for an "economist". She carries a pager which he uses to alert her when he's in Germany and needs her services - which is only a few times a year. She asks Sayid what he does, he tells her that he's a corporate headhunter and will only be in town for one week. She remarks that Sayid seems familiar to her somehow. He offers to take her to dinner that night. After leaving the cafe, Sayid calls someone on a cellphone, saying that he has "made contact", and then throws the phone in the trash.

On their fifth date, Sayid and Elsa get ready to leave her place to go to the opera; they seem affectionate, and Elsa impulsively decides to leave her pager at home, saying that she'd rather just spend the evening with Sayid and doesn't care if her boss calls that night. Sayid offers to carry the pager for her, saying that he wouldn't want her to be fired on his account. When Elsa asks why he's still in Berlin - presumably it's been longer than a week - Sayid tells her that his job is taking longer than expected. She wistfully tells him that she wishes that she was the reason he was staying. ♪

Later that evening, Sayid and Elsa lie in bed after sex. ♪ Elsa tells Sayid that she's growing tired of not knowing anything about his job or background; she loves him and that they shouldn't have secrets. ♪ Sayid agrees and says he will tell her everything, but her pager goes off. She scrambles to dress and go to her boss. Sayid asks where she's going, and she tells him the name of a hotel. Sayid tells her that she must leave Berlin, and that people will be asking questions about "what happened to [her] boss." At this point, Elsa realizes that their meeting was not about her, but a way for Sayid to get to her boss and asks whether he is going to kill him. Sayid says "he is not an economist." Upset, she retreats into the bathroom. Still on the bed Sayid tries to talk to her, she turns around with a gun in her hand and shoots him. ♪

As Sayid lies bleeding on the bed, Elsa, still in the bathroom, calls someone and reports that she hasn't killed Sayid and he still will not tell her the name of his employer. As she talks, Sayid grabs something and throws it against the mirror of the bathroom door which she was using to watch Sayid. When she rushes out of bathroom, he lunges for his gun and shoots her. He struggles over to her body and weeps. As he holds her, he notices a bracelet (similar to Naomi's bracelet).

Later, Sayid stumbles into a dimly lit veterinarian's office. ♪ He proceeds into the surgery, where a voice tells him to take off his jacket. Sayid sits down, and the person begins treating the wound and questioning him about what Elsa's objective had been. Sayid tells him that she had been trying to find out his identity and his employer's. Benjamin Linus's face is impassive as he works on Sayid's shoulder. ♪ When Sayid brokenly expresses remorse for having killed Elsa, Ben tells him "these people don't deserve our sympathies," asking Sayid if he remembers what "they" did the "last time you followed your heart instead of your gun?" Sayid indicates that it was through this event that Ben recruited him. Ben reminds him that the work they are doing is to protect Sayid's "friends." He says that he has another target for Sayid's list. Sayid observes that "they" now know he is coming, to which Ben replies, "Good."

The Season 4 soundtrack includes the track "Lost Away - Or Is It?" from this episode.

For fan theories about these unanswered questions, see: The Economist/Theories

Retrieved from "https://lostpedia.fandom.com/wiki/The_Economist?oldid=1113811"
Community content is available under CC BY-NC-ND unless otherwise noted.