Start a Wiki
The Chronicles of Narnia 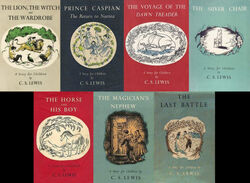 The Chronicles of Narnia is a series of seven fantasy novels for children written by C. S. Lewis between 1949 and 1954. The series presents the adventures of children who play central roles in the unfolding history of the fictional world of Narnia, a place where mythical creatures exist, magic is common and good battles evil. The guardian of Narnia is Aslan, a talking lion. Each of the books (with the exception of The Horse and His Boy) features protagonist children who are magically transported from Earth to Narnia, where they are called upon to help Aslan right some wrong.

The seven books are:

Just as the Lost characters had to remember and realize they were dead to move on, in The Last Battle a group of dwarfs cannot see that they are actually in Aslan's country. Instead they only see what they are prepared to believe, that they are in a smelly, dark stable instead of a beautiful country.

Wikipedia has information related to:
The Chronicles of Narnia
Retrieved from "https://lostpedia.fandom.com/wiki/The_Chronicles_of_Narnia?oldid=1118064"
Community content is available under CC BY-NC-ND unless otherwise noted.