"The cabin" redirects here. For other uses of the word "cabin", see Cabin. 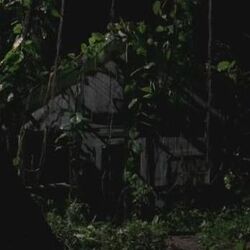 First seen
"The Man Behind the Curtain"
Last seen
"The Incident, Part 1"
{{{Listen}}}
Constructed by
Horace Goodspeed
Controlled by
None, Destroyed
Connection
{{{Connection}}}
Number
{{{Number}}}
Purpose
{{{Purpose}}}
Status
{{{Status}}}
Discovered by
{{{Discover}}}
DHARMA Initiative Stations
The Hydra • The Arrow • The Swan
The Flame • The Pearl • The Orchid
The Staff • The Tempest
The Looking Glass • The Lamp Post
[[:Category:{{{Images}}}|Images]]

The cabin was a rustic wooden structure on the Island built by Horace Goodspeed during the time of the DHARMA Initiative. The cabin has had a connection to Jacob and has appeared in different locations on the Island. Benjamin Linus brought Locke here ostensibly to meet Jacob and later, when visiting the cabin, Ilana stated that Jacob had not been there in a long time - "someone else" had been using it. The cabin was destroyed in 2007 when her group proceeded to burn it to the ground. ("The Man Behind the Curtain")  ("Cabin Fever")  ("The Incident, Part 1")

It appears the cabin was constructed sometime prior to the Purge by Horace Goodspeed as the means for him, his wife, and supposedly his son Ethan, to get away from the day to day bustle of the DHARMA Initiative. As the blueprints of the cabin were found on his body in the mass grave this may suggest the building was never quite finished. ("Cabin Fever")

Exactly what happened to the cabin between the Purge and the arrival of the survivors of Oceanic flight 815 is unknown. It appears, however, that the cabin was at some point used temporarily by Jacob and The Man in Black. ("The Incident, Part 1")

After demanding to see Jacob, Ben brought Locke to the cabin from the Others' camp. Arriving at night, they first encountered a line of ash around the cabin and stepped carefully over it before approaching the cabin.

On entering, Ben approached an apparently empty chair in the middle of the room addressing the "person" there as Jacob. Seeing no one there, Locke became convinced either Ben was trying to deceive him or was truly crazy. Disgusted with this charade, Locke turned to leave when he heard a low voice say "Help me," that Ben did not seem to hear. Turning back to the room, Locke accused Ben of speaking, but Ben denied that he had. Switching on his flashlight and sweeping it around the room, both men appeared shocked when the room began to shake. Objects shook violently and flew across the room, a rocking chair suddenly began to move of its own accord, and the lamp fell to the floor and caught fire. Ben grabbed a hold of the chair he had addressed before, telling him he'd had his fun, but was thrown back against the far wall by a mysterious force. Looking back across the room, for a split second, Locke saw a mysterious individual sitting there.

Moments later, upon fleeing the cabin, both men appeared somewhat shaken. Locke asked what had just happened, and Ben responded, "That was Jacob." ("The Man Behind the Curtain")

While trekking across the Island to warn the survivors about the freighter crew, Hurley accidentally fell behind. On wandering alone through the jungle and trying to catch up, Hurley was startled to see the cabin in front of him with a light gleaming from one of the windows. The cabin this time appeared to be in the center of a clearing and not at all where Locke had previously encountered it.

Approaching gingerly, and peering in through, Hurley saw "Christian Shephard" sitting in a rocking chair, when suddenly someone else's eye appeared at the window. Hurley screamed, and ran directly away from the building, but suddenly came up short a short distance away when he found himself literally in front of the cabin again. To all appearances, the cabin had seemingly shifted location. As the front door of the cabin began to slowly open, Hurley shut his eyes, concentrating and telling himself it was not real over and over. Upon reopening his eyes, the cabin was gone. ("The Beginning of the End")

Hurley did not observe the circle of ash surrounding the cabin. Later, when Locke mentioned that the group was going to the cabin, Hurley seemed to feel that they were going the wrong direction. ("Confirmed Dead")

On attempting to return to the cabin with his group, Locke was unable to locate the building. Strangely, however, he did find the same circle of ash at the same location. ("The Economist")

Following a dream in which he met Horace Goodspeed, Locke located a set of blueprints on Horace's corpse found at the mass grave of DHARMA Initiative members killed in the Purge. The blueprints contained a map of the cabin's location on the Island in addition to detailed specifications on the construction for the building. Using the map as a guide, Locke was able to successfully return to the cabin with Ben and Hurley. Declining to join him, the two men elected to wait outside while Locke entered on his own. Ben stated that he would not enter the cabin as Locke was now the leader of the Others.

Entering, Locke found the same dirty ramshackle interior with the exception of finding "Christian Shephard" sitting in the shadows. Locke asked, "Are you Jacob?" "Christian" introduced himself and claimed he could speak on Jacob's behalf. Locke was then perplexed to discover Claire also sitting nearby, smiling calmly. On asking what she was doing there, Claire told Locke not to worry, that she was here with "Christian". Seeing Locke beginning to ask questions about her presence, "Christian" abruptly brought Locke's attention back to the matter at hand: Keamy's mercenaries returning in the helicopter from the freighter. Locke asked, "How do I save the Island?"

Locke emerged from the cabin a few minutes later, informing Hurley and Ben that an unspecified "he" wanted them "to move the Island." ("Cabin Fever")

Three years later in 2007, Ilana, Bram, Frank, and the other members of Ilana's group arrived at the cabin carrying the large airline crate containing Locke's corpse. On approaching the building, Bram noticed the ash circle was broken and shouted a warning to Ilana. Entering the cabin cautiously, Ilana found it abandoned and empty, but for a small scrap of cloth held to the wall with a knife. Removing it, she found the cloth contained a small stylized image of the statue of Taweret. Exiting the cabin, Ilana informed Bram that Jacob was not there, that he had not been at the cabin in a long time and that someone else was using it. She then ordered the others to set fire to the cabin. The group departed, leaving the structure to burn. ("The Incident, Part 1")

Reveal of the cabin's inhabitant

It is later revealed by The Man in Black that appearances on the Island of Christian Shephard were in fact him, and therefore the person inside the cabin was most likely the Man in Black. ("The Last Recruit")

In several instances, individuals arriving at the cabin have discovered a line of gray ash that appeared to encircle the building. Ben appeared to regard the line with caution in stepping over it, but made no comment as to its purpose.

The line appeared to be intact in all occasions when it was found in 2004, but was seen to be broken in 2007 when Ilana's group arrived at the cabin. Bram noticed the break and reacted with some measure of alarm. ("The Man Behind the Curtain")  ("The Incident, Part 1")

The cabin exterior was marred by age and neglect. A single lantern hung on a post outside on the front porch. When visiting for the first time, Ben explained to Locke that there was no other sources of light as Jacob has a strong dislike of technology. Locke made use of the same lantern in his meeting with Christian. ("The Man Behind the Curtain")  ("Cabin Fever")

The interior of the cabin was dim, dirty, and neglected. Several objects, old and unused, appeared about the single room, including:

For fan theories about these unanswered questions, see: The Cabin/Theories

Retrieved from "https://lostpedia.fandom.com/wiki/The_Cabin?oldid=1110307"
Community content is available under CC BY-NC-ND unless otherwise noted.