For the sacred poem, see Psalm 23. 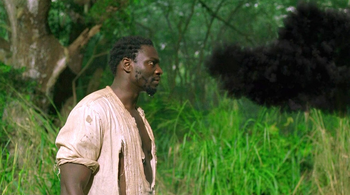 "The 23rd Psalm" is the tenth episode of Season 2 of Lost and the 35th produced hour of the series as a whole. When Eko finds Charlie's Virgin Mary statue, he demands that he take him to where he found it at once. Elsewhere, Michael continues to communicate on the Swan computer without the other survivors knowing.

Nigerian guerrillas descend upon a small village. They grab a small boy, Yemi, and try to force him to shoot an old man. The boy hesitates, so his older brother takes the gun and shoots the man himself. The guerrillas are pleased with this, and ask him his name, to which he replies, "Eko." The leader says that "Mr." Eko is a "born killer," and takes him, leaving his brother and the other children behind. Eko's cross is torn from his neck by the leader, who says, "You won't need this anymore." Yemi picks up the cross as Eko rides away into the distance, facing life as a child soldier.

Many years later, Eko has become a powerful warlord in Nigeria. He meets with a drug dealer, Middle Eastern or North African, who is trying to get a large quantity of heroin out of the country. Eko offers to do him a "favor," buying the drugs at a ridiculously low price and spiriting them out of the country. The drug runner reluctantly agrees. Before he leaves, however, he tells Eko, "It's true what they say about you. You have no soul." Eko proceeds to slit the throat of the man and his assistant, but lets the man's son live, saying, "Tell all your friends that I let you live, that Mr. Eko let you live."

Now a grown man, Eko visits the church in his hometown. A woman outside is trying to sell statues of the Virgin Mary to raise money for polio vaccines for the village. Eko's brother Yemi, who has become a priest, appears from the church and greets him. Eko asks him for a plane, because only foreign and missionary aircraft are allowed to fly out of Nigeria. He says he will fly the drugs out of Nigeria, away from their people, and give his brother the money for the polio vaccines. His brother tells Eko that he still loves him, but refuses to help.

Eko later approaches his brother again, asking Yemi to sign papers that will make Mr. Eko and two other men priests so that they can fly a plane themselves. His brother refuses at first; Eko tells his brother that if he does not obey he will not hurt him, but his friends will burn the church to the ground. His brother reluctantly signs.

Eko and his two gangster friends are dressed as priests as they prepare to board a small plane at a landing strip near the village. They are interrupted by Yemi, who drives up to the plane and begs Eko not to leave. He insists Eko will die if he gets on the plane. Yemi is soon followed by the Nigerian military. Eko's two friends open fire at the military, and one dies in the firefight. Eko's brother tells the military to stop, but he gets shot himself. Eko carries his brother into the plane and tells his friend to get in. His friend does, but kicks Eko away from the plane before he can get in. As Eko watches the plane carrying his wounded brother fly away, the military approach and, mistaking Eko for a real priest, ask Eko, "Are you alright, Father?"

Claire introduces herself to Eko and sees that he is whittling scripture into the head of his club. She says he should talk to Charlie about religion, given the Virgin Mary statue he has been carrying. Eko is surprised and demands to see the statue. Claire tells Eko it's "just a statue," but he breaks open the statue and shows Claire the heroin inside. Charlie denies he knew what was in the statue, but Claire doubts him. Eko demands that Charlie take him to the place where he found the statue. Charlie takes him to a tree and claims that he found the statue under the tree. Eko becomes upset and demands that Charlie take him "to the plane." Charlie also notices the scriptures on the stick Eko carries.

Meanwhile, Locke teaches Michael how to use a gun. Michael asks Kate if he can have her shift at the computer; she agrees. Michael types a message to Walt, but the computer won't take any input. It comes on by itself, displaying "Dad?" It asks if Michael is alone, and finally claims Michael has to come for him. The person on the computer says that "they are coming back," but, before he can say anymore, Jack arrives. ♪ Jack talks to Michael, saying that everyone cares about Walt, and as soon as they can, they will go out to bring him back. When Jack walks behind Michael on his way out, the conversation has disappeared from the monitor.

Charlie takes Eko further into the jungle, complaining that Eko ruined his relationship with Claire and Mr. Eko shouldn't judge him because it was his brother that got him addicted to heroin. Eko and Charlie find a parachute in a tree, which leads to the corpse of the Nigerian man dressed as a priest that Boone and Locke had found. He opens the man's shirt. The dead man wears no cross but instead has one gold tooth, which Eko touches. When he realizes it's not his brother, he says a prayer, telling Charlie the man saved his life.

Charlie loses his way, and Mr. Eko tells him to climb a tree. Charlie reluctantly obliges. While he is in the tree, there are explosions in the jungle and the black smoke that Jack, Locke and Kate once saw arrives. Mr. Eko stands his ground, despite Charlie telling him to run. The black smoke approaches Eko. Eko stares fearlessly at the cloud for a few moments, and as the camera passes through the cloud, there is a chattering noise. There are dark images flashing inside the cloud, images which are from Eko's past: the man he shot, his mother, his brother, a church, and a crucifix. The black smoke pulls back and disappears.

Eko and Charlie find the plane. Eko finds another corpse inside, opens its shirt, finds the cross around the corpse's neck, and weeps. Eko tells Charlie that the man inside is his brother. He gives Charlie a Virgin Mary statue "for the one I broke."

Charlie asks Eko if he is in fact, a priest himself. Eko pauses, then smiles softly and puts the cross around his neck. "Yes," he replies, "I am." He burns the plane, reciting Psalm 23 from the Old Testament. Charlie joins in the recitation.

At the Beach camp, several survivors lead their island life. Kate gives Sawyer a haircut, Jin introduces Sun to Ana Lucia and presents her with a fish, and Hurley helps Libby set up shelter, both glancing flirtatiously at each other. Finally, Charlie apologizes to Claire, but Claire tells him to leave her and Aaron alone. Charlie goes into the jungle and opens a hiding place to reveal that he has seven additional Virgin Mary statues. He places the one that Mr. Eko gave him with the other seven. ♪

This episode introduces a theme and a motif for Eko. The former closes the episode, appearing on the Season 2 soundtrack as "All's Forgiven... Except Charlie".

Retrieved from "https://lostpedia.fandom.com/wiki/The_23rd_Psalm?oldid=1115686"
Community content is available under CC BY-NC-ND unless otherwise noted.