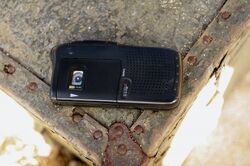 First introduced
"D.O.C."
Last seen
"The Man Behind the Curtain"
Owned by
Juliet and Ben
Found by
Ben and Locke
Used by
Juliet

During Juliet's infiltration of the survivors' camp, she and Ben arranged to communicate with each other using a tape recorder, hidden in one of the lockers at the Staff station.

After helping Sun determine the father of her baby, Juliet secretly left a message on the recorder regarding the fertility of the pregnant women. ("D.O.C.") Ben later played the message in his tent at the ruins as Locke came to see him. Locke seemingly noted where Ben put the recorder (in a drawer) and later stole it and gave it to Sawyer, providing proof for his claim that Juliet is a spy at beach camp working for Ben. Sawyer took the tape recorder with him as he headed back to the beach. ("The Brig")

At the camp, Sawyer revealed the truth about Juliet by playing the tape. Juliet arrived and quickly instructed him to play the other side, where the survivors heard Ben's message that the Others planning to kidnap the fertile women. Juliet then revealed that she had already told Jack about the plan, and that they were still thinking of a counterplan. ("The Man Behind the Curtain")

However, it should be noted that this was the first time Juliet heard Ben's recorded message. At this point, Ben also had no way of knowing if she had received it or not.

Retrieved from "https://lostpedia.fandom.com/wiki/Tape_recorder?oldid=1042428"
Community content is available under CC BY-NC-ND unless otherwise noted.