Whats with the repeated confusion between these two? it has to be an as yet unexplored feature in the plot of the show, are they the same person, are they twins? is Steve an "other"? Any ideas?

Over at the LOST Wiki (ducks and covers), there's an interesting analysis explaining how it really is Steve that died, and that they're still confusing them.

For one, the actors have discussed it in nesr detail over on the Fuselage. Dustin Watchman (Scott) continues to appear on the show, and Christian Bowman (Steve) confirmed he was the dead body in the sand.

As well, it mentions Ana-Lucia going out recruiting for the army, and saying she got "The big guy behind Sayid, and Scott". It wouldn't have made much sense that Ana-Lucia would mix them up, since she came to the camp long after Steve died, and she probably spoke directly to Scott.

We might have to search for some more proof, but maybe we should make a Scott and Steve article, and a way to prove who it really was.

No, this is LostPedia. I'm referring to This separate Wiki.

The producers have said a lot of things that don't work when you watch the show. We shouldn't take what they say as absolute truth when it contradicts what's obviously right. Steve is dead, and for some reason Scott's still being mistaken for Steve. What actually happens in the show trumps what the producers say.JoserKyind 05:26, 18 September 2006 (PDT)

This is not the case JoserKyind (I know its taken me a while to reply!) Scott is the dead one, as has been mentioned on many, many occasions. The real reason we have this situation is a casting mix up, but its very much certain that Scott is dead. It has been mentioned on several interviews and podcasts. --04:24, 6 December 2006 (PST)

If Scott is the dead one, then why is he still seen on the island, as recently as Tricia Tanaka Is Dead, I might add, and Steve's body is the one found? The only logical explanation is that it was Steve who died, and most of the other survivors still think that it was Scott. Also, the producers have admitted that they lost track of which one was alive and which one was dead, so statements made by the producers shouldn't be counted as absolute canon in this instance.JoserKyind 17:14, 6 March 2007 (PST) 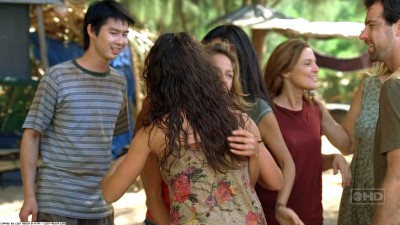 This image is from Tricia Tanaka Is Dead. He's looking pretty healthy for a dead guy. Seriously, I think it's time this site caught up to the fact that Scott is still alive, and Steve died.JoserKyind 19:30, 2 April 2007 (PDT)

I agree, he gets on the last powered raft trip with Daniel before the sky turns white in TNPLH Pt. 2-3! I've loved Sceve from the get-go but I just wish the producers would say "We screwed up by having Hugo give the eulogy for Scott when it was Steve that died, our bad" or take 15 seconds --that's all it would take for James or someone to say something-- to clear it up, instead of all the stuff they've said. They admit, sort of, they got it wrong, but Dustin Watchman, the man in the image there, clearly, CLEARLY says "I'm Scott!" in The Moth, what's the big deal? --Henry Holland 21:00, 3 June 2008 (PDT)

Look, we go on what the producers have said since... which is that Steve is alive and Scott died. REGARDLESS of what we see on screen, this is how they wish it to be portrayed. We deal with the facts THEY give us...  Plkrtn  talk  contribs  email  02:21, 25 June 2008 (PDT)

It turns out that Christian Bowman has not been on the show since "Homecoming," as stated on his actor page on this wiki. Apparently his was the body found on the beach, and he has not been seen on the show since. Dustin Watchman, however, has continued on the show. The other characters still seem to think Scott died and Steve is alive. Scott, however, has been seen as recently as the Season 4 finale. --Castaway815 17:09, 26 June 2008 (PDT)

Retrieved from "https://lostpedia.fandom.com/wiki/Talk:Scott_Jackson?oldid=479043"
Community content is available under CC BY-NC-ND unless otherwise noted.