I apologize for having acted before bringing this before the Talk page. I propose we make this freighter crew "Omar" the main Omar for the following reasons:

...so I think it is in our best interest to help them out and make this Omar THE Omar. I have already gone through and insured that all links referring to Sayid's Omar redirect to Omar (Solitary). As far as the Omar page, the only redirection links that exist are currently Omar (freighter crew) (which is currently serving as the article's home base) and Omar (The Constant) (which is only linked to in Season 4 and Portal:Freighter - articles I, personally, can't edit). What do you guys think?--Overworkedirish 23:42, 22 March 2008 (PDT)

Was Omar a redshirt/killed in this episode? Did anyone see his face in the mercenaries? ---- LOSTonthisdarnisland 04:58, 25 April 2008 (PDT)

I don't think Omar has had a single spoken line yet (as of "the Shape of Things to Come.") I find it weird that he was specifically introduced at the same time as Keamy, yet he's been such a non-entity and is actually one of about 6 mercenaries. What makes him more noteworthy than other other mercs?C.m. 15:04, 25 April 2008 (PDT)

Thanks Robert for getting that image. Also, he was cast specifically as a military-type, and along with Keamy, was called as virtual bodyguards on the freighter when Ray sounded the alarm in the sick bay.--Overworkedirish 13:32, 29 April 2008 (PDT)

Omar actually has had several lines... "We last ported Fiji, so at least we know we're still in the Pacific" being his most noteworthy. I agree that he's nothing more than a background character and it's a little weird that he was introduced alongside Keamy, but he HAS had dialouge. Evil-pineapples 19:51, 29 April 2008 (PDT)

Not on the island

Should Omar be moved to "Major Freightie" or should he remain as a "Minor Freightie" ? We see that he's Keamy's second-in-command for the mercs, and he's always seen with Keamy. (Except when Keamy goes to kill Michael, and when Gault and Keamy pull out Ben's file.) Marko 17:37, 13 May 2008 (PDT)

Throughout the second half of Season 4, 6 mercs have been shown raiding the barracks and after 1 being killed by the Monster, 5 (including Omar) returned to the Island where they were all killed. In 4x09 and 4x10, Anthony Azizi is not credited in playing Omar yet an unnamed merc is seen in both these episodes. This unnamed merc is clarely shown to be bald in 4x10 and having black camo over his face like Redfern. In 4x11, we clearly see Omar (played by Anthony Azizi) being one of the ones getting off the chopper. Is it possible that Azizi was not available at the time and an extra (who hasn't been seen since 4x10) was used as a stand in for Omar and that black camo was used to help disguise this? I believe this is so and should be included in the appearance section and his bio. HolySock92 11:19, 6 June 2008 (PDT) 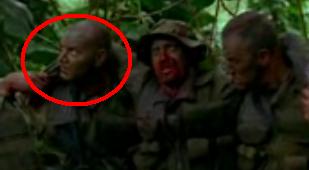 Sorry if I missed something but is it now fact that he was on the island during 4x09 and 4x10? In 4x11 didn't Omar tell the doctor he got a call about the doctor being in trouble? I can't really remember exactly what he said, but could it mean he took the call? I don't know for certain, I'll have to watch again. -- User:Benjamin Linus is Not a Horse

Retrieved from "https://lostpedia.fandom.com/wiki/Talk:Omar?oldid=947326"
Community content is available under CC BY-NC-ND unless otherwise noted.