I just added this episode to Libby's flashback scenes, because if "Dave" deserves Libby-centric status then LT,DA definitely does.

Libby was aware of to visit the staff(station explorers).--robert h

I checked over the Season 2 transcripts. Libby never mentions her age. Of course, it's possible there was shown on screen some document that revealed her age or date of birth, and it wasn't properly mentioned in the transcript.  Robert K S   tell me  19:11, 18 March 2009 (UTC)

Does this belong in the article? I think it does, given the unanswered questions will always be so: BE: Will we ever find out why Libby was in the mental institution and if she knew Hurley pre-island?

CC: No, we feel like we resolved Libby’s fate, and for the fans that are still obsessing about Libby, maybe at some point someone will write sort of a “Star Wars”-like novel about the story of Libby, but we don’t consider that to be a major story thread for us. [2] --Xbenlinusx 19:26, 22 April 2009 (UTC)

"The producers have stated that they would like to reveal more of Libby's back story, but the actress who plays her is unable or unwilling to comply." listed in trivia. I'd love to know the source for this?--Integrated (User / Talk) 05:24, 1 June 2009 (UTC)

Which came first? In the newest interview revealing why Libby was in the institution, they say she was there BEFORE she got out and gave her boat to Desmond. Here is a link to something they said awhile back about going from point A to point B, Desmond to the mental institution: http://www.spoilerfix.com/lost.php. Thoughts? Alexisfan07 4 July 2009

The new interview timeline makes sense. This gives her character arc a cohesion more in line with how other character arcs have been resolved on the show. Eko finds his faith, then dies. Michael redeems himself, then dies. Shannon discovers someone trusts her, then dies. Boone declares independence from Shannon, then dies. In this case, Libby's struggle was with love. David died and she was in "a dark place" according to Darlton. As soon as she learned how to love again (with Hurley), her struggle with that particular personal demon was over. And then she died promptly after that. It fits. Sure it would be nice to know how she was in Australia. We can imagine it was another character connection, like she was working for Widmore or something like that, but it was still probably on that character arc - that she was learning how to love again. She resolved that with Hurley and THAT is why Darlton considers the matter closed - the arc was resolved.Johnnyd1980 21:45, 7 July 2009 (UTC)

Revealed at Comic Con, all other Comic Con material has been considered canon. The video was quite upsetting really...--Integrated (User / Talk) 15:31, 28 July 2009 (UTC)

Funny, I thought we resolved this past year that Comic Con material was not canon, especially in light of last year's video bit that didn't pan out, and the subsequent Darlton admission that (paraphrasing here) "Comic Con material is for the fans, don't hold us to it".  Robert K S   tell me  05:09, 8 August 2009 (UTC)

We've gone both ways on this (see Hugo "Hurley" Reyes and James "Sawyer" Ford). In this case, since she was really never known as Elizabeth on the show, Libby Smith might be more appropriate. (But even the "Smith" seems dubious as being non-canon. Being such a common/generic name, it seems more like something they made up just for a hastily-produced spoof video. And Darlton have explicitly said that Comic Con material can't be held as canon.  Robert K S   tell me  22:55, 13 August 2009 (UTC)

Libby and jacob has something what's the same by them. They appeared both in other peoples flashbacks. Libby appeared in Eko, Desmond and Hurley. Jacob appeared in Hurley, Jack, Sawyer, Kate, Locke, Sayid & Ilana.--Station7 13:36, September 22, 2009 (UTC)

The infobox says she hasn't appeared in any season (or Missing Pieces), yet we know she was in Seasons 2 and 4. For the life of me, I can't figure out how to update said template, since it appears to run on other pages or something.--Tim Thomason 04:23, February 10, 2010 (UTC)

Furthermore, this seems to effect some other characters, like Dogen and even Hurley, suggesting that some of Season 6 has not been updated in the templates yet. There should be an easier way to do this, or I'm missing something.--Tim Thomason 05:24, February 10, 2010 (UTC)

Even more so that Ana Lucia, whose pic we just fixed, this article's picture doesn't portray its subject. It's a promotional pic and a fabulous photo of Cynthia Watros, but that's not Libby. Though she's a master of disguise, Libby at no time and in no universe looked a thing like that.

The thing is BalkOfFame, the ABC promotional department has put out 4-5 "profile" pictures for each main character every season. And all of the lostpedia profiles for the past and present main characters (except Walt) use the latest promo "profile" pic for that character as the main image. I certainly see no problem with mixing it up a bit, but it seems to be an established practice around here, so I'm thinking that you will get little support on this. Also, while I'm indifferent about whether the image gets changed, I have to say that the unofficial practice that I just mentioned makes some sense in that, without it, it would really become a free-for-all with people endlessly wanting to change main characters' profile pictures. —   lion of dharma    talk    email   23:57, May 10, 2010 (UTC) 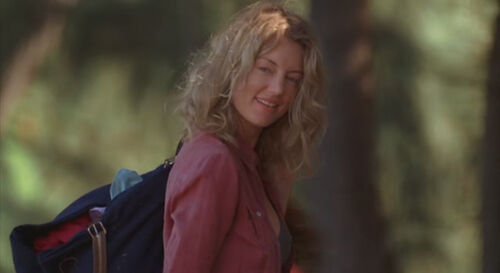 As LOD mentioned the practice is to use promo pics if avaialble walt is the exception because he aged so much having a promo pic of him when he was 10 would be incorrect. Not only do promo pics keep order but they look much better than most grainy screencaps. -- B1G CZYGS  Talk  Contribs  00:28, May 11, 2010 (UTC)

Do you really think that the picture is not of Libby? If you do i can assure you it is of libby, it was released pre season 2 by ABC for LOST. I thought you meant it didnt look like her but if you actually think its just a random pic of Cinthya it is of Libby. -- B1G CZYGS  Talk  Contribs  02:34, May 11, 2010 (UTC)

The suggestion that we rename this article to Elizabeth "Libby" Smith should be removed. Libby is a common abreviation of Elizabeth not a character specific nickname. That is why we don't have Katherine "Kate" Austin or Walter "Walt" Lloyd. The only reason we do it with Sawyer and Hurley is that they are not common abbreviations of James and Hugo. Mhtm ghnd....talk 03:38, August 1, 2010 (UTC)

I'd go with the first one, though I find it hard to describe exactly what in her expression makes her seem more like Libby than the current pic does. --- Balk Of Fame ♪ talk 20:35, November 6, 2010 (UTC)

I'd actually go with the third pic, however maybe just crop it so it's zoomed in better on the upper half of her body. Johnlanigan 05:06, November 17, 2010 (UTC)

The second one is the pose she strikes on the season 6 poster. But it would probably need to cropped. Illyrias Acolyte 21:08, February 9, 2011 (UTC)

Retrieved from "https://lostpedia.fandom.com/wiki/Talk:Libby_Smith?oldid=1044622"
Community content is available under CC BY-NC-ND unless otherwise noted.