Does Sayid still have it?

Does Sayid still have possession of the map or did the Others take it from him?

Hi everyone! Basically, what I´ve done is to take the map made by Morozov Sergei and then I´ve updated it with lots of little changes and additions in order to have a more accurate version (a good one, I´d say) that i woud like to share with the other Lost fans. Thanks! P.D: I´m having problems with the "Barracks Key" box because I can´t read what its written there. Cornik

In the season three DVD/blu-ray extras, a second slightly different DHARMA cabling map appears. The Barracks are referred to as "base camp" and there is a river to the east of the barracks. The details inside the barracks compound are different and I think the terrain in the area is also different. The numbers at the bottom of both maps is the same. Dharmatel4 18:12, 12 December 2007 (PST)

Multiple editions of the DHARMA cabling map exist. At least three different versions have been identified so far.

The first map was one used in Enter 77. Only the Flame in the corner was seen in episode. This one is interesting in that the Barracks is called "base camp" and the topography is totally different than the subsequent maps. The image inside the security perimeter of the barracks is a blow-up of the houses around Bens from the Barracks set design illustrations. The river crossed in Par Avion is directly represented and noted in this map. Its dropped in the other maps. THe 120ft notation which seems to give the distance between fence pylons also appears. The compass bearing at the top of the map also shows clearly that north is slightly off center from the top of the map. 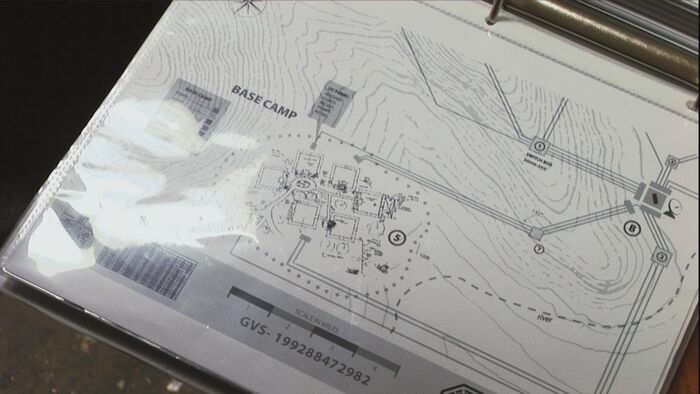 This appears to be a second or intermediate version of the Cable map. As far as I can tell, it only appears in the season 3 DVd extras. The terrian now matches the final version, the Barracks is now represented by a full image of the set design illustration. Production notes can actually still be seen within the Barracks image. Missing from this second version of the map are the underground passages at 20' deep and various other details of the connection of the Barracks to outside infrastructure. 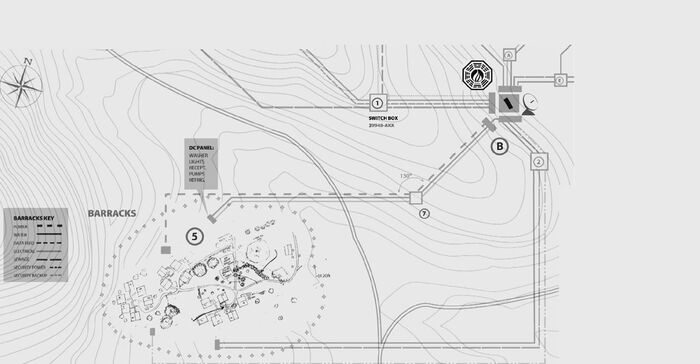 The third and presumably final version of the map comes from the production still already in the article. Its the same map as is seen in Par Avion. Only one additional detail showed up in the hidef images. Slightly above the "barracks key" box, there is a vertical line of text: "(??)ge line 30". The front characters of the first word are too blurred to read. The production notes in the barracks area were also cleaned up in the final version.

There's a disconnect between the scale of the map and label of 120 feet between the poles of the security fence. The line with the label appears to be about one third of the length of one of the sections in the "SCALE IN MILES" portion of the legend. It's virtually impossible for each of those sections to be a mile. If each one is a tenth of a mile, although that's not what's printed, then 528 / 120 = 4.4.--Jim in Georgia Contribs Talk 09:43, 12 June 2008 (PDT)

Updated with revealed information in "The Other Woman", Tempest is power station, this is mentioned with 4x06 evidence to backup Atyndall 03:13, 11 March 2008 (PDT)

Do we have access to anexpert opinion on whether DC is the appropriate power to use for the Barracks facilities, such as washers? I'd been taught that AC was preferrable.--Jim in Georgia Contribs Talk 06:53, 5 August 2008 (PDT)

Where is the boat house where Miles was kept? One presumes it's fairly near the barracks, and based on its name, fairly near some water as well. Also, there must be water nearby as the barracks is near the docking facility where people once came and went from the Dharma Initiative. I thought it would be seen on this map. Is it inside the defensive perimeter? Muninn99 13:27, 6 November 2008 (PST)

Retrieved from "https://lostpedia.fandom.com/wiki/Talk:DHARMA_cabling_map?oldid=601472"
Community content is available under CC BY-NC-ND unless otherwise noted.